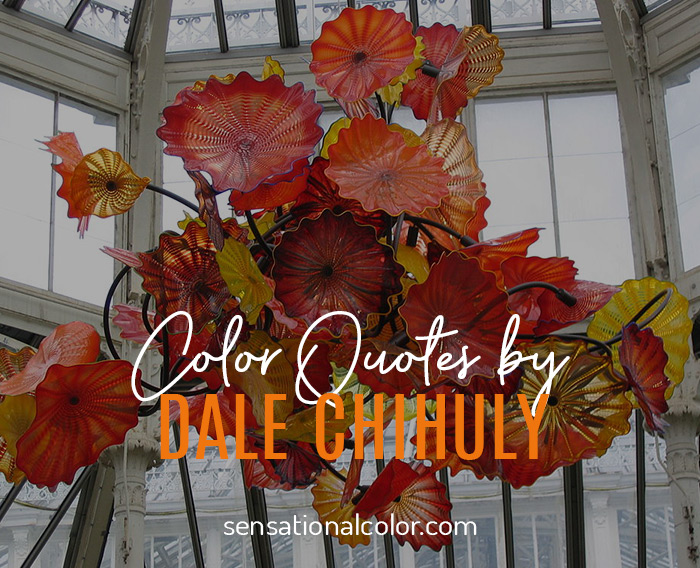 There are two Dale Chihuly quotes that are quite popular with color lovers -- "I never met a color I didn't like." and "I don’t know if something can be too colorful..." You can see a few more below.

As way of a little background, Dale Chihuly, is an American glass sculptor and entrepreneur. His works are considered unique to the field of blown glass, "moving it into the realm of large-scale sculpture". The technical difficulties of working with glass forms are considerable, yet Chihuly uses it as the primary medium for installations and environmental artwork.

In 1976, Chihuly was involved in a head-on car accident during which he flew through the windshield. His face was severely cut by glass and he was blinded in his left eye. After recovering, he continued to blow glass until he dislocated his right shoulder in a 1979 bodysurfing accident. No longer able to hold the glass blowing pipe, he hired others to do the work. Chihuly explained the change in a 2006 interview, saying "Once I stepped back, I liked the view" and pointed out that it allowed him to see the work from more perspectives and enabled him to anticipate problems faster. Chihuly describes his role as "more choreographer than dancer, more supervisor than participant, more director than actor." (excerpted from wikipedia)

I don’t know if something can be too colorful... -- Dale Chihuly #quote #color

I want people to be overwhelmed with light and color in a way they have never experienced.

I can’t understand it when people say they don’t like a particular color. . . . How on earth can you not like a color?

I never met a color I didn’t like. -- Dale Chihuly #quote #color

I don’t know if something can be too colorful. Color is one of the great properties of glass and is more intense in glass than any other material. Imagine entering Chartres Cathedral and looking up at the rose window: you can see a one-inch square of ruby red glass from 300 feet away.