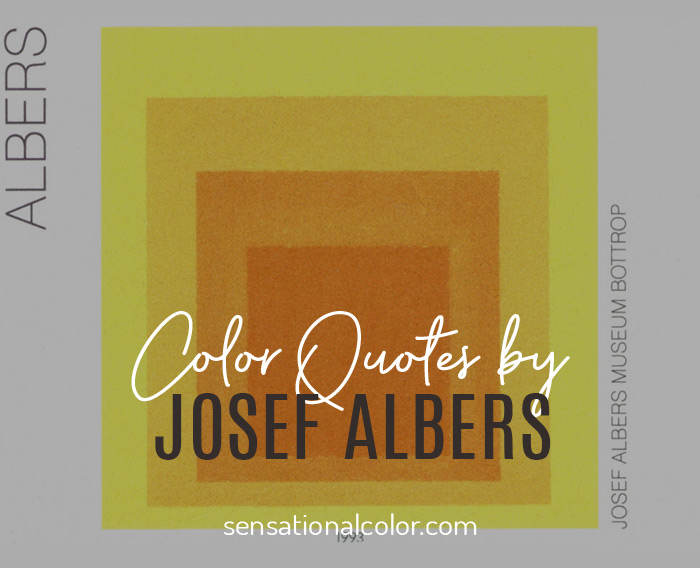 Although limited here to Josef Albers quotes about color there are so many ideas expressed by this great man that he is a true inspiration to any art or color lover.

Josef Albers was instrumental in bringing the tenets of European modernism, particularly those associated with the Bauhaus, to America. His legacy as a teacher of artists, as well as his extensive theoretical work proposing that color, rather than form, is the primary medium of pictorial language, profoundly influenced the development of modern art in the United States during the 1950s and 1960s.

Albers's 1963 book Interaction of Color provided the most comprehensive analysis of the function and perception of color to date and profoundly influenced art education and artistic practice, especially Color Field painting and Minimalism, in the twentieth century.

His series Homage to the Square, produced from 1949 until his death, used a single geometric shape to systematically explore the vast range of visual effects that could be achieved through color and spatial relationships alone.

Albers's art and theories were widely disseminated to generations of artists and art-school faculty through his teachings at the Bauhaus, Black Mountain College, and Yale University, and they provided the theoretical basis for the development of non-objective art during and after the age of Abstract Expressionism. (excerpted from theartstory.org)

Color is like cooking. The cook puts in more or less salt, that’s the difference!

Any ground subtracts its own hue from the colors which it carries and therefore influences.

If one says ‘Red’ – the name of color – and there are fifty people listening, it can be expected that there will be fifty reds in their minds. And one can be sure that all these reds will be very different.

Simultaneous contrast is not just a curious optical phenomenon - it is the very heart of painting.

I've handled color as a man should behave. You may conclude that I consider ethics and aesthetics as one.

I was for years in the yellow period, you know.

The aim of our studies is to prove that color is the most relative means of artistic expression, that we never really perceive what color is physically.

In visual perception a color is almost never seen as it really is - as it physically is. This fact makes color the most relative medium in art.

Color, in my opinion, behaves like man in two distinct ways: first in self-realization and then in realization of relationships with others.