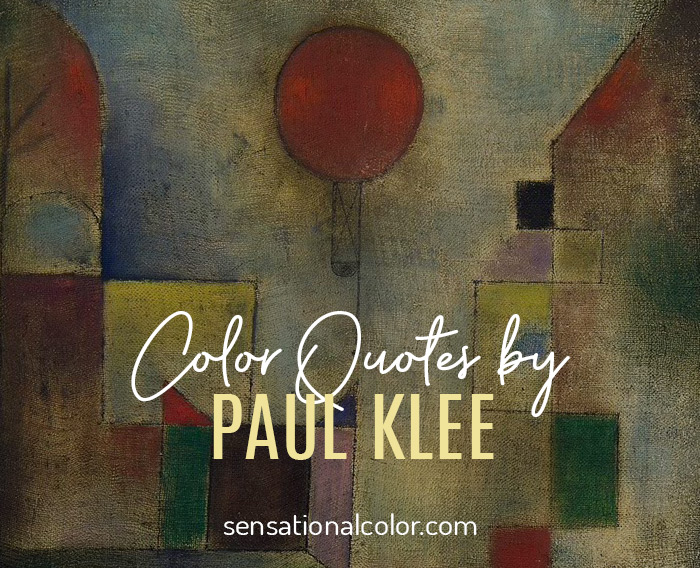 Paul Klee was a prolific Swiss and German artist best known for his large body of work, influenced by cubism, expressionism and surrealism. Klee's diverse body of work cannot, however, be categorized according to any single artistic movement, or "school."

Klee constantly experimented with artistic techniques and the expressive power of color, in the process often breaking traditional or "academic" rules of painting. Klee applied paint in unusual ways, such as spraying and stamping. A love of color is clear in the Klee quotes below.

Klee’s artistic breakthrough came in 1914, after a trip to Tunisia. Inspired by the light in Tunis, Klee began to delve into abstract art and painted his first pure abstract, In the Style of Kairouan, composed of colored rectangles and circles.

By 1917, art critics began to classify Klee as one of the best young German artists. Klee taught at the Bauhaus from 1921 to 1931, alongside his friend Kandinsky. In 1923, Kandinsky and Klee formed the Blue Four with two other artists, Alexej von Jawlensky and Lyonel Feininger, and toured the United States to lecture and exhibit work.

Klee began teaching at Dusseldorf Academy in 1931. Two years later, he was fired under Nazi rule. The Klee family moved to Switzerland in late 1933. Klee was at the peak of his creative output during this tumultuous period. He produced nearly 500 works in a single year and created Ad Parnassum, widely considered to be his masterpiece. (excerpted from theartstory.org and biography.com)

I still come closest to success with drawing. When I use color the results are dubious, for these painfully gained experiences bear less fruit.

Color has got me. I no longer need to chase after it. It has got me forever. - Paul Klee #color #quotes

Color and I are one. I am a painter.

Color is the place where our brain and the universe meet. - Paul Klee #color #quotes

Color possesses me. I don’t have to pursue it. It will pursue me always, I know it.