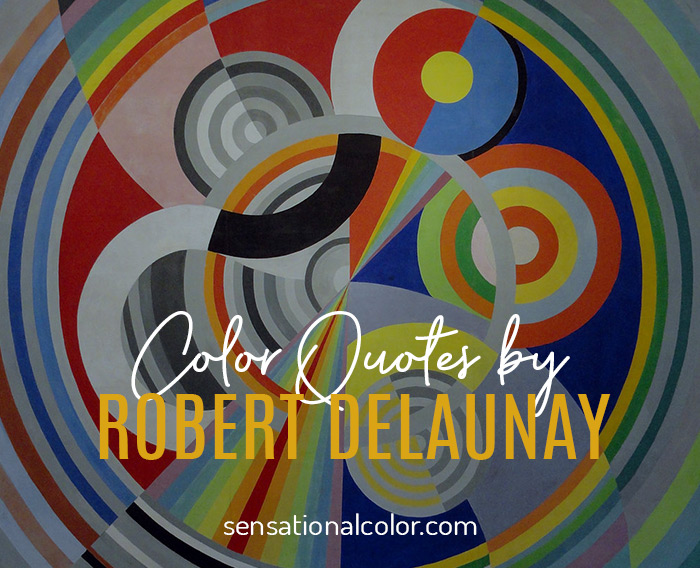 French painter Robert Delaunay is best known for being among the first to introduce vibrant color into Cubism. This began a trend later known as Orphism, which is noted for its use of strong colors and geometric shapes. The Delaunay quotes speak of his appreciation of color, proportion, movement and light in art.

Delaunay's work is noted for its use of strong colors and geometric shapes. His later works were more abstract. His key influence related to bold use of color and a clear love of experimentation with both depth and tone. His theories are mostly concerned with color and light and influenced many other artists.

His writings on color, which were influenced by scientists and theoreticians, are intuitive. Some are random statements based on the belief that color is a thing in itself with its own powers of expression and form. He believes painting is a purely visual art that depends on intellectual elements. He also believed perception is in the impact of colored light from the eye. The contrasts and harmonies of color produce in the eye simultaneous movements and correspond to movement in nature. Vision becomes the subject of painting. (excerpted from wikipedia)

These are based on studies in the transparency of color, whose similarity to musical notes drove me to discover the ‘movement of color’.

On the other hand, the artist has much to do in the realm of color construction, which is so little explored and so obscure, and hardly dates back any farther than to the beginning of Impressionism.

First of all, I always see the sun! The way I want to identify myself and others is with halos here and there halos, movements of color. And that, I believe, is rhythm.

Clarity will be color, proportion; these proportions are composed of diverse elements, simultaneously involved in an action.

On the other hand, the artist has much to do in the realm of color construction, which is so little explored and so obscure, and hardly dates back any farther than to the beginning of Impressionism."