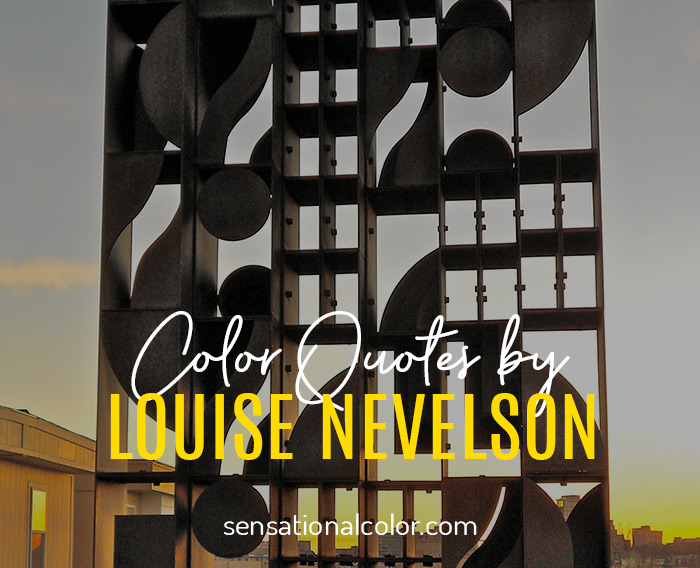 Louise Nevelson was an American sculptor known for her monumental, monochromatic, wooden wall pieces and outdoor sculptures. Her sculptures appear puzzle-like, with multiple intricately cut pieces placed into wall sculptures or independently standing pieces, often 3-D. A unique feature of her work is that her figures are often painted in monochromatic black or white. Although there aren't many Louise Nevelson quotes about color her quote about seeing color is one of my favorites.

Born in the Poltava Governorate of the Russian Empire (present-day Ukraine), she emigrated with her family to the United States in the early 20th century. By the early 1930s she was attending art classes at the Art Students League of New York, and in 1941 she had her first solo exhibition. A student of Hans Hofmann and Chaim Gross, Nevelson experimented with early conceptual art using found objects, and dabbled in painting and printing before dedicating her lifework to sculpture.

As a student of Hans Hofmann she was taught to practice her art with a limited palette, using colors such as black and white, to "discipline" herself. These colors would become part of Nevelson's repertoire. She spray painted her walls black until 1959. Nevelson described black as the "total color" that "means totality. It means: contains all ... it contained all color. It wasn't a negation of color. It was an acceptance. Because black encompasses all colors. Black is the most aristocratic color of all. The only aristocratic color ... I have seen things that were transformed into black, that took on greatness. I don't want to use a lesser word."

In the 1960s she began incorporating white and gold into her works. Nevelson said that white was the color that "summoned the early morning and emotional promise." She described her gold phase as the "baroque phase", inspired by the idea being told as a child that America's streets would be "paved with gold", the materialism and hedonism of the color, the sun, and the moon. Nevelson revisited the Noh robes and the gold coin collections at the Metropolitan Museum of Art for inspiration. (excerpted from wikipedia)

Nevelson called herself "the original recycler" owing to her extensive use of discarded objects, and credited Pablo Picasso for "giving us the cube" that served as the groundwork for her cubist-style sculpture.

Nevelson remains one of the most important figures in 20th-century American sculpture.

I fell in love with black; it contained all color. It wasn’t a negation of color…Black is the most aristocratic color of all… You can be quiet, and it contains the whole thing.”