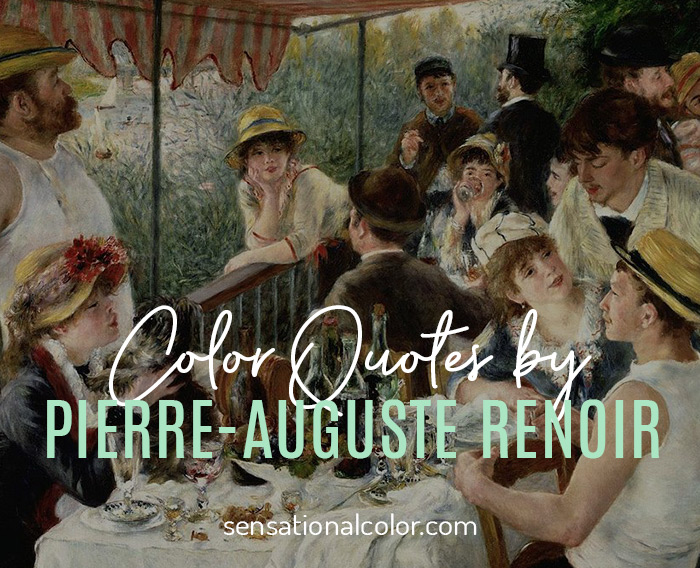 A leading Impressionist painter, Pierre-Auguste Renoir was one of the most famous artists of the early twentieth century. The Renoir quotes gathered below speak to his style and strong feelings about color.

An innovative artist, Pierre-Auguste Renoir started out as an apprentice to a porcelain painter and studied drawing in his free time. After years as a struggling painter, Renoir helped launch an artistic movement called Impressionism in 1870s. He eventually became one of the most highly regarded artists of his time.

Renoir, like other Impressionists, embraced a brighter palette for his paintings, which gave them a warmer and sunnier feel. He also used different types of brushstrokes to capture his artistic vision on the canvas. While the first Impressionist exhibition was not a success, Renoir soon found other supportive patrons to propel his career.

The world-renowned Renoir continued to paint until his death. Besides leaving behind over two hundred works of art, Renoir served as an inspiration to so many other artists most noteworthy Pierre Bonnard, Henri Matisse and Pablo Picasso are just a few who benefitted from Renoir's artistic style and methods. (excerpted from biography.com)

I want a red to be sonorous, to sound like a bell. If it doesn’t turn out that way, I add more reds and other colors until I get it.

Such a magnificent sky, and it’s nothing but white paper! - Pierre-Auguste Renoir #color #quotes

With all their damned talk of modern painting, I’ve been forty years discovering that the queen of all colours is black/

With a limited palette, the older painters could do just as well as today… what they did was sounder.

White does not exist in nature.