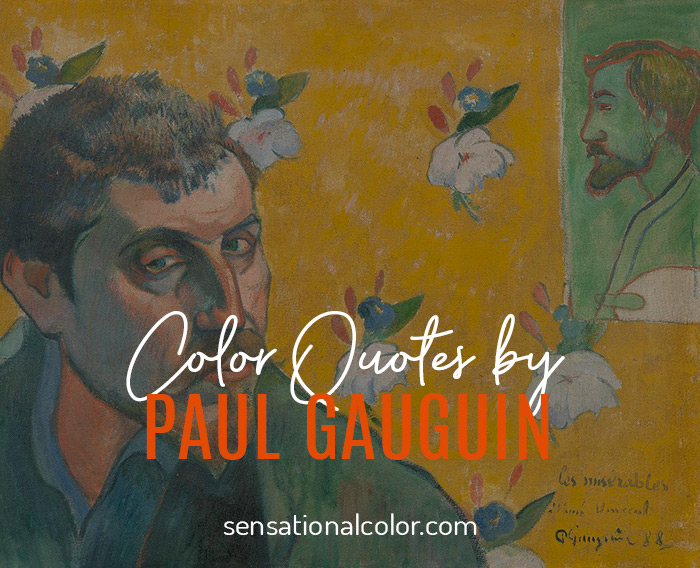 Paul Gauguin was a French post-Impressionist artist. Underappreciated until after his death, Gauguin is now recognized for his experimental use of color and synthetist style that were distinctly different from Impressionism. Gauguin's bold colors, exaggerated body proportions and stark contrasts helped him achieve broad success in the late 19th century. Inspired by color Gauguin quotes speak of his direct experience with the medium.

He was an important figure in the Symbolist movement as a painter, sculptor, printmaker, ceramist, and writer. His bold experimentation with color led directly to the Synthetist style of modern art, while his expression of the inherent meaning of the subjects in his paintings, under the influence of the Coisonnist style, paved the way to Primitivism and the return to the pastoral. He was also an influential proponent of wood engraving and woodcuts as art forms.

Gauguin's use of bold colors, exaggerated body proportions and stark contrasts in his paintings set him apart from his contemporaries, helping to pave the way for the Primitivism art movement. Gauguin often sought exotic environments, and spent time living and painting in Tahiti. His work was influential to the French avant-garde and many modern artists, such as Pablo Picasso and Henri Matisse. (excerpt from wikipedia)

Color which, like music, is a matter of vibrations, reaches what is most general and therefore most indefinable in nature: its inner power….

It is the eye of ignorance that assigns a fixed and unchangeable color to every object; beware of this stumbling block.

Color! What a deep and mysterious language, the language of dreams. -- Paul Gauguin  #color #quotes

Oh yes! He loved yellow, did good Vincent… When the two of us were together in Arles, both of us insane, and constantly at war over beautiful colors, I adored red; where could I find a perfect vermilion?

If you see a tree as blue, then make it blue.