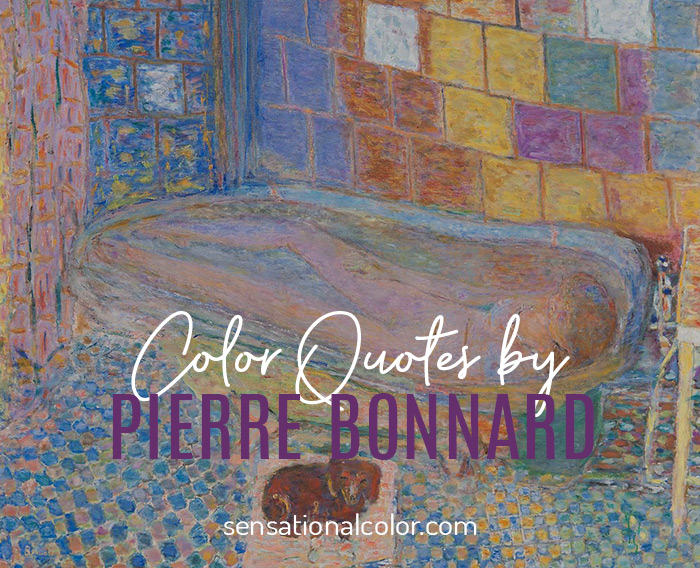 A French painter and printmaker, reading the Pierre Bonnard quotes about color will begin to give you a feel for his style. He was a founding member of the Post-Impressionist group of avant-garde painters Les Nabis. Bonnard preferred to work from memory, using drawings as a reference. His paintings are often characterized by a dreamlike quality.

Bonnard has been described as "the most thoroughly idiosyncratic of all the great twentieth- century painters." The unusual vantage points of his paintings rely less on traditional pictorial structure and more on voluptuous color, poetic allusions and visual wit.

"It’s not just the colors that radiate in a Bonnard", writes Roberta Smith, "there’s also the heat of mixed emotions, rubbed into smoothness, shrouded in chromatic veils and intensified by unexpected spatial conundrums and by elusive, uneasy figures."

Bonnard is known for his intense use of color, especially via areas built with small brush marks and close values. His often complex compositions—typically of sunlit interiors of rooms and gardens populated with friends and family members—are both narrative and autobiographical.

Bonnard did not paint from life but rather drew his subject—sometimes photographing it as well—and made notes on the colors. He then painted the canvas in his studio from his notes. "I have all my subjects to hand", he said, "I go back and look at them. I take notes. Then I go home. And before I start painting I reflect, I dream." (excerpted from wikipedia)

You reason color more than you reason drawing… Color has a logic as severe as form.

It is still color, it is not yet light.

Drawing is feeling. Color is an act of reason.

Color does not add a pleasant quality to design – it reinforces it.”