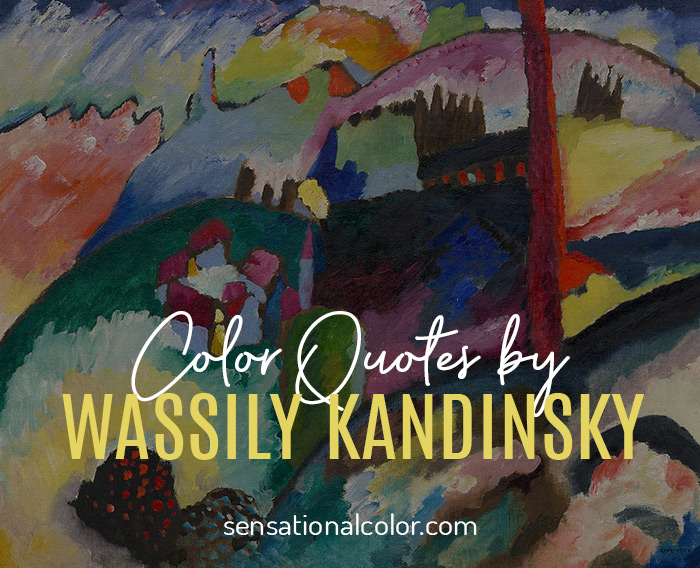 Russian-born painter Wassily Kandinsky is credited as a leader in art in the early 20th century. He was one of the founders of pure abstraction in painting. The ideas about color in the Kandinsky quotes below illustrate how he saw it as an expression of emotion rather than a faithful description of nature.

A trained musician, Kandinsky approached color with a musician’s sensibility. An obsession with Claude Monet led him to explore his own creative concepts of color. His works were sometimes controversial among his contemporaries and critics. By the early 20th century, Kandinsky emerged as a respected leader of the abstract art movement .

Kandinsky believed that each time period puts its own indelible stamp on artistic expression. His vivid interpretations of color through musical and spiritual sensibilities altered the artistic landscape at the start of the 20th century. (excerpted from biography.com)

A parallel between color and music can only be relative – just as a violin can give warm shades of tone, so yellow has shades, which can be expressed by various instruments.

Color is a power which directly influences the soul. - Wassily Kandinsky #color #quotes

I applied streaks and blobs of colours onto the canvas with a palette knife, and I made them sing with all the intensity I could…

Colour is the keyboard, the eyes are the hammers, the soul is the piano with many strings. The artist is the hand that plays, touching one key or another purposively, to cause vibrations in the soul.”

Color provokes a psychic vibration. Color hides a power still unknown but real, which acts on every part of the human body. - Wassily Kandinsky #color #quotes

As a picture painted in yellow always radiates spiritual warmth, or as one in blue has apparently a cooling effect, so green is only boring.”

Almost without exception, blue refers to the domain of abstraction and immateriality.

Absolute green is the most restful color, lacking any undertone of joy, grief, or passion. On exhausted men this restfulness has a beneficial effect, but after a time it becomes tedious.