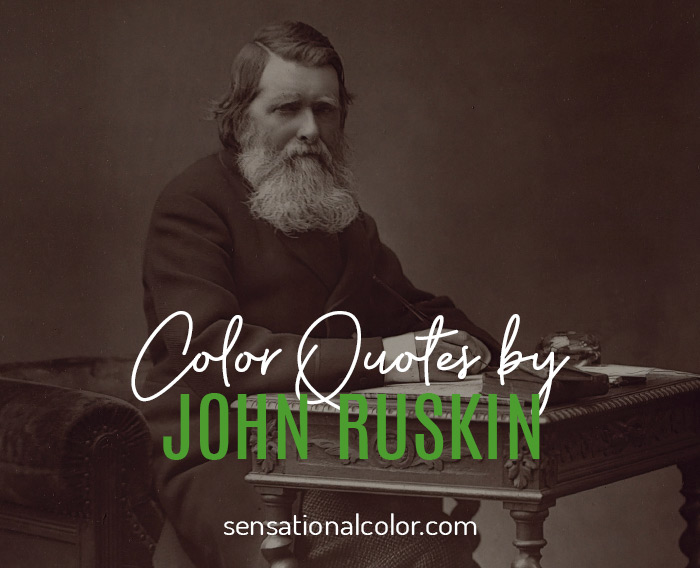 John Ruskin was the leading English art critic of the Victorian era, also a watercolourist, draughtsman, an art patron, a prominent social thinker and philanthropist. He wrote on subjects as varied as geology, architecture, myth, ornithology, literature, education, botany and political economy. Ruskin quotes about color show influences from many of these fields of study.

He became known as a brilliant critic of landscape painting and a champion of the works of the painter J.M.W. Turner and the Pre-Raphaelites. He later became chair of Fine Arts at Oxford University. Ruskin is viewed by many as a critical driver among a group of men who began the Arts & Crafts movement in England during the latter half of the 19th century. This movement was the forerunner of the American Arts & Crafts movement.

Along with William Morris, he was critical of the new industrialization taking place in Europe and America. Ruskin's most radical idea was his total rejection of any machine produced products. He characterized all machine made objects as "dishonest." He believed, along with Morris, that handwork and craftsmanship brought dignity to labor. (arts-crafts.com)

John Ruskin was a critic who could out-paint most painters, a great educator who reinvented how we see art. He was an astonishing figure, as Tim Hilton’s magisterial 2002 biography of him proves. He was a great artist in his own right: his watercolours of Swiss mountains and nature studies speak of an extraordinary brilliance, made more passionate by their creator’s intent. Ruskin put art into practice. (theguardian.com)

Blue color is everlastingly appointed by the deity to be a source of delight.

The purest and most thoughtful minds are those which love color the most. - John Ruskin #color #quotes

The man who can see all gray, and red, and purples in a peach, will paint the peach rightly round, and rightly altogether. But the man who has only studied its roundness may not see its purples and grays, and if he does not will never get it to look like a peach; so that great power over color is always a sign of large general art-intellect.”

Everything that you can see in the world around you presents itself to your eyes only as an arrangement of patches of different colors.