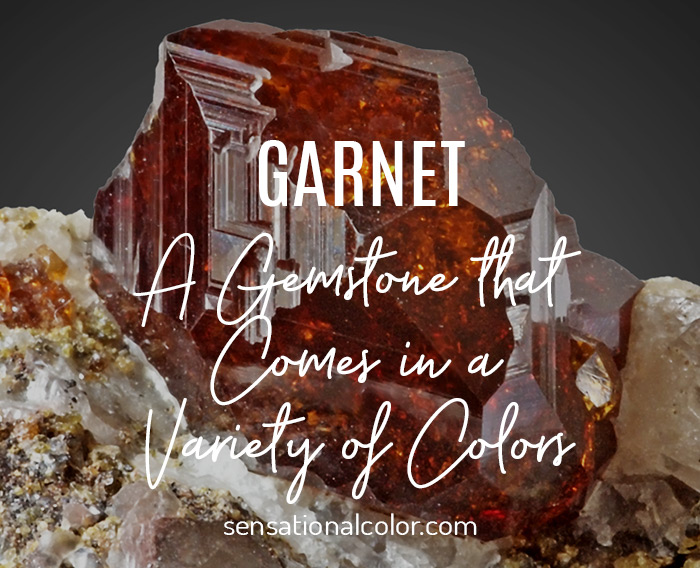 ​My mom and I share many things in common – our taste in books and movies that make us both cry, enjoying cooking (and eating), love of art and music, our outlook on life, and since both of us were born in in the same month we also share the January birthstone color gorgeous garnet. Lucky us!

Talking about my mom, when we see each other, we have the best time. She has many gifts, with her most significant being her ability to bring joy to everyone who knows her. Her kindness and love are effortless.

Last year I surprised my mom with garnet earrings I made for her birthday. Two handpicked beautifully faceted teardrop stones in deep red with fantastic luster set in 18k gold that showcased them perfectly. She wears them every day but enjoys them most for fancier occasions as well.

The stone was first named in the 14th century as garnet because of its resemblance to pomegranate seeds. Although the gem is present in a variety of colors, the January birthstone color of red is the most recognized.

Garnet is a group of minerals that comes in a variety of colors. The colors of stone range from vibrant green to deep red, golden, rust, and violet. The main types of stone include uvarovite, andradite, pyrope, and almandine. It is a durable stone with remnants of garnet jewelry produced in the Bronze age discovered with the stones intact.

Pyrope is the most common, and its deep red color is familiar to most people. Pyrope name comes from the Latin word "pyropos," meaning "fiery."

Grossular comes in shades of lush greens and cinnamon browns.

Andrite comes in a range of dark greens, browns, and blacks.

Spessartine discovered in Madagascar has a beautiful yellow-orange color called "mandarin garnet," and is one of my favorites as a January birthstone color.

Demantoid is a garnet for real aficionado. It is a very bright green who's brilliance is higher than that of diamonds! Found in the Ural Mountains of Russia, it became the legendary jeweler – Carl Faberge's favorite gem. When a horsetail inclusion is present, it further enhances the uniqueness and beauty of this stone. Garnet is not only known for its attractive colors, but its amazing optical properties also make it unique as well. The stone sometimes gives a star-shaped reflective pattern.

Although found in different parts of the world, the major mining sites of garnet are India, Russian, US, Tanzania, Greece, and the Czech Republic. The chemical composition of the garnet stone varies and is based on its origin as well. In some species, the atomic bond is stronger, and these extra tough garnets are perfect for cutting and abrasive purposes at an industrial scale.

Long before it was the January Birthstone Color, Garnet was a Favorite Gem

Garnet, as a gemstone has enjoyed a glamorous life for centuries. Folklores associated the stone with prosperity, health, and peace if placed in a home. Some people consider garnet a gem of faith. People who wear garnet tend to do good and encourage others to behave in the right way, too.

Egyptians considered garnet a symbol for life. As early as 3100 BC they used garnet stone extensively in their jewelry and carvings. Romans also gave a great deal of importance to garnet. In ancient Rome, a garnet signet ring meant that the wearer was considered to have a particular authority. In middle ages, the nobility favored garnets remained famous.

A garnet ring was used as a talisman and given for protection to people who were going into battle. Warriors used to wear it often in ancient times to ward off the plague. Historically, garnet was thought to have miraculous healing properties. Ancient healers said that garnet has some magical healing powers. They placed it on wounds to stop bleeding, used it to treat ailments and protect against poisons. portableantiquities [CC BY 2.0] via Wikimedia Commons

Above is an 8th century AD, Anglo-Saxon sword hilt fitting – gold with gemstone inlay of garnet cloisonné. From the Staffordshire Hoard, found in 2009, and not thoroughly cleaned.

The Victorians adored garnets, too. Their unique style of setting many small stones resembled the seed clusters of a pomegranate. Perhaps you have an heirloom from a great grandmother like this? Have a jeweler check clasps and pin catches first, then, by all means, wear it. Garnet is considered more than a pretty gemstone. A symbol of eternal friendship, garnet represents deep relationships and is a heartfelt gift for your mom, best friend or anyone you valued having in your life.