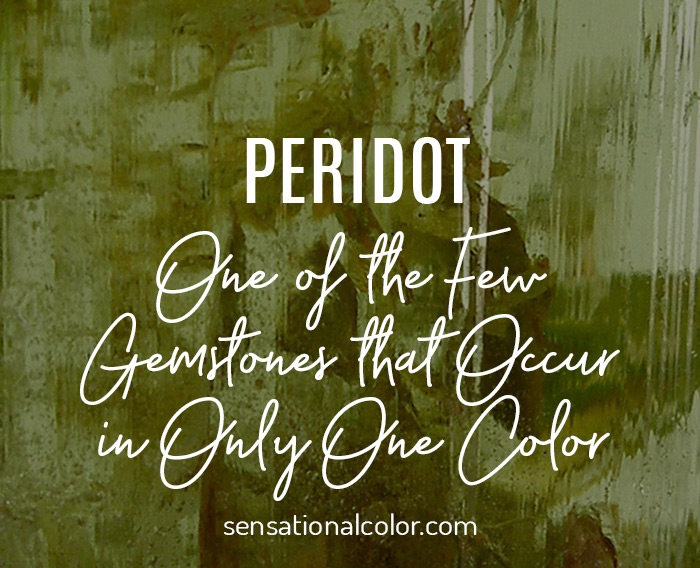 Pure and pretty, August birthstone color, Peridot is a perpetual pleaser. It is paler than precious emerald and tourmaline, however; by no means paltry. For many it is preferable, perhaps because picking peridot for a bit of panache will not empty your purse. Peridot, whose name was born of the word "peritot" that is the French word meaning gold is the translucent green gemstone variety of the abundant mineral olivine. It is one of the few gemstones that occur in only one color: an olive-green. The tint and intensity of green depend on the amount of iron in the crystal structure, so the color of peridot can vary from almost yellow, to olive and a rather brownish-green.

Peridot is, it is a symbolic gift for couples celebrating their sixteen years of marriage.

Since its discovery in about 1500 BC, the gemstone has gained the attention of the curious minds. It is believed to have strong magical powers. First discovered in the Topaz Sea Island, now known as St. John's Island in the Egyptian Red Sea and was guarded against any jealous watchers or evil eyes by this stone according to legends. The island used to have an abundance of a highly prized dark green variety, but today, the most desirable colors are bright lime greens – the more vivid, the better.

Peridot has been used extensively in jewelry and carved talismans since ancient times. Habitants of the island used to collect peridot for Pharaoh's treasury. The miners worked both day and night to find the stone. The stones glow in the dark. Radiance of this stone helped in finding the stone after nightfall. The miners would mark the area after sunset and begin mining on the marked spots the next day. Several legends involving peridot have cropped up throughout ancient history. One of these stories told of peridot having the magical ability to protect people, and the stone became a talisman.

Another legend about the stone was about its ability to dispel fears and terrors. Peridot was supposed to stop bad dreams and night fears. Many Romans also used the magical powers of peridot. They believed that placing it on the right arm afforded the most potent magical effects of peridot.

Peridot is the national gem of Egypt -- the place of its discovery -- where it is known as the gem of the Sun. For over 3500 years the stone was mined in the Egyptian Red Sea Island. However, in the 18th century, the exact whereabouts of the mines were lost.

For some time, the island was a mystery to people. Legend says that the island, engulfed in fog, was impossible the navigators to approach it. The real story is that the location of the island was lost for centuries and not rediscovered until 1905.

Egyptians used to mine peridot extensively and kept authority over the mines. After the rediscovery of the island, a vast amount of peridot was produced from its mines and sold all over the world. However, after the 1930s the production tapered and stopped completely till 1958 when the nationalized mines reopened.

Because of its property to shine in the dark, peridot is sometimes called "Evening Emerald." Peridot has some similar qualities to Emerald, but its color and glow are softer in intensity.

The stone forms during volcanic eruptions and small pieces of peridot are found scattered along the beaches in Hawaii. Folklore tells the story of how they are crystallized tears from the Goddess of Volcanoes, Pele. Peridot sells for lower prices than many gems, but once the size reaches 2 carats or more, it can be quite expensive. The most exceptional quality is 8 carat, but that is rarely found.

Peridot above eight carats is found only in museums. In American museums, very rare, large, and expensive peridot is present. You can find them in New York in the American Museum of Natural History, in the Chicago Field Museum and at the Smithsonian Institute in Washington DC where 310-carats of peridot is on display.

This simple setting with a flattering cushion cut peridot, showcases the clear lime green stone's luminosity. You don't have to be green with envy. The price is pleasing, making peridot plausible for everyday pizazz!