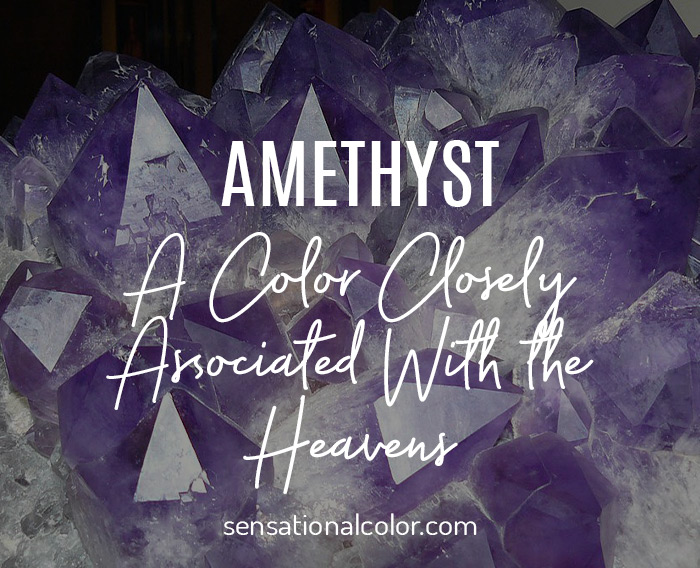 February birthstone color, amethyst, evoke emotions. People seem to love it or hate it. But why is it that the color of this gemstone either strikes a chord or touches a nerve? Is it what the color purple connotes? Do those who who dislike this gem associate purple with Donny Osmond's socks, wizard robes, or disco sequined tube tops? And why do others love this royal hue?

Prince, nicknamed The Purple One, loved amethyst and the color purple. His over-the-top theatrics displayed his penchant for purple in grand style. I find Amethyst one of the most flattering colors in the spectrum. From the lilacs we will see during spring and summer to the rich aubergines of the autumn, purple is my sophisticated color of choice. Amethyst comes in varying shades so that it will fit nicely with both the seasons and your taste.

At one end of the spectrum, it can be a pale, slightly pinkish violet or be turned way up to a deep grape. The most desirable grade of amethyst is Deep Siberian. Discovered in Russia, it is a rare mix of rich purple and blue with a touch of red flash. Ancient Greeks and Romans made intaglio's from slices of amethyst. Above is a portrait of the Roman Emperor Caracalla; inscription in Greek letters OIIETPOC. A cross was added at the Byzantine period in order to transform the portrait to that of St. Peter. The Amethyst intaglio is circa 212 AD and is From the treasury of the Sainte-Chapelle in Paris.

Catherine the Great sent thousands of miners into the Ural Mountains in search of this gem. Tibetans consider amethyst sacred to the Buddha and make prayer beads from it. Roman Catholic priests had large cabochons set into papal rings.

For centuries it was customary for bishops to wear amethysts in their rings, giving rise to the term "bishop grade" for the finest stones of deep purple.

Because of its association with the many religious beliefs, amethyst and the color purple are closely associated with the heavens and spiritual thought, and Amethyst is known as the great protector from negativity. Jackie O loved to wear a graduating necklace of faceted amethyst teardrops that sold at Sotheby's for $55,000. I can safely say all the above had a heightened sense of culture and taste. Worn with black or gray this unique quartz looks very sophisticated and modern. In his poem L'Amethyste, ou les Amours de Bacchus et d'Amethyste (Amethyst or the loves of Bacchus and Amethyste), the French poet Remy Belleau (1528–1577) invented a myth in which Bacchus, the god of intoxication, of wine, and grapes was pursuing a maiden named Amethyste, who refused his affections. Amethyste prayed to the gods to remain chaste, a prayer which the chaste goddess Diana answered, transforming her into a white stone. Humbled by Amethyste's desire to remain chaste, Bacchus poured wine over the stone as an offering, dyeing the crystals purple.

Since this tale it has remained a strong talisman against intoxication. The greek word "a" means not, and "methustos" to intoxicate. Wine goblets were carved from amethyst and small crushed crystals of the rock were added to wine to keep from overindulging but please do not try this at home.