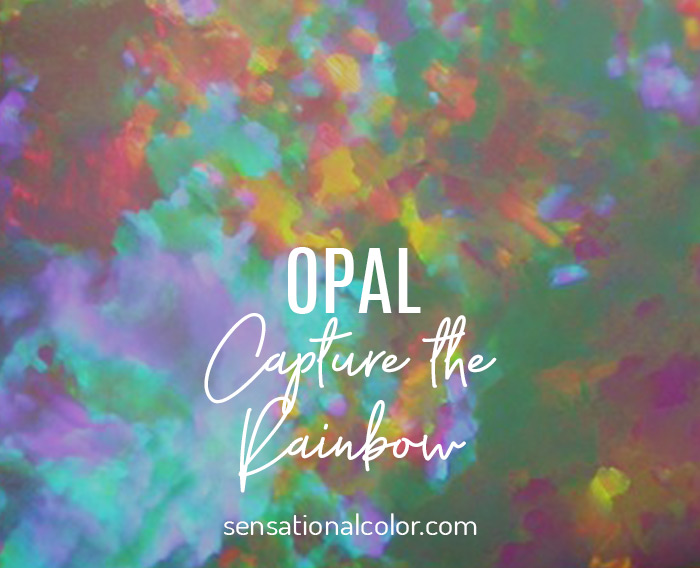 Opal is one of my all-time favorite gems. As valuable as ruby and emerald but worlds apart in appearance. The October birthstone color, opals are an entity all their own. No other stone is quite like it. Millions of years ago when most of Australia was a vast inland sea, opals were created within lava rock. A prehistoric combination of quartz rock [silica] and water is the basic recipe for their beauty. The water within the stone is what makes it so distinct. When light hits an opal, the thin layers of fractured rock and water sends off a rainbow of colors.

Black, light, and milk opals can be found only in Australia, and the indigenous Aboriginal people have a beautiful legend about how this mystical gem came to their land. The creator came down to earth on a rainbow. The purpose of his voyage was to bring the message of peace on earth to all humans. The very spot where his foot first touched down suddenly became alive, and the ground was glowing with all the colors of the rainbow. A Rainbow of Colors

Opals can vary widely in appearance with some being more colorful and desirable than others. Opal depends on three aspects of its appearance. Color, which includes both the background color and the play of color. Pattern or the arrangement of the play-of-color. Clarity, which describes transparency and quantity of inclusions.

Color
The hues travel across the spectrum with opal ranging from one color to all the colors of the rainbow. Opal displays background or body color plus what is called the play-of-color.

The background of an opal puts it into a color category with some more prized than others. Black is the one many buyers favor because the dark background enhances the play-of-color.

No matter the background color, the play-of-color dramatically influences the value. An opals play-of-color must be vivid to receive a high rating.

The range of the play-of-colors also affects an opal's value. The play-of-color commonly include one main color and two or more secondary colors. A range across the entire spectrum is rare, so even if it isn't vibrant adds to the value.

Desirable play-of-color is further broken down by the colors themselves. Traditionally, red is considered the best prominent color, orange the next most desirable, followed by green. However, favored colors can vary with fashion or personal preference.

An opal's play-of-color can change along with the viewing angle or type of light. For example, red might dominate in the same portion of an opal cabochon where blue dominates when viewed from a different perspective. The most valuable opals display play-of-color from all angles.

Pattern
The pattern describes the arrangement of the play-of-color and can come in many forms. Most people prefer larger patches of color over tiny, scattered dots.

Clarity and Transparency
Clarity is its degree of transparency and can range from completely transparent to opaque. Different levels of clarity add value for different types of opals.

For example, in crystal opal, experts admire transparency, while in black opal, they prefer an opaque background. Each provides the best backdrop for displaying play-of-color in its opal type. A cloudy or milky background color lowers the value of any opal. It makes the gem less attractive, and it can sometimes signal a lack of stability.

Due to the high water content of about 6-10%, an opal can become brittle and lose some of its flash and fire if subjected to dry climates, indoor heating, or direct sunlight. Humid air and moisture from your skin are what this gemstone loves. In ancient times, opal was very rare and prized by royalty, making it a valuable gem. The only known source was Červenica in Slovakia until the discovery of a wealth of opal in Australia.

Historically opal is one of the most controversial gems. For many centuries it was a highly revered stone. The ancient Greeks called it opallios, meaning "to see a change in color." They believed it gave foresight and prophecy. Roman philosophers extolled about its beauty, and it was thought to bring purity and hope. To the Arabs, it was sacred and thought to make its owner invisible, making it a stone coveted by thieves. Fair maidens wore opals in their hair to protect the color.

Opal's first stroke of bad luck came during the Plague. People noticed that the stone's 'fire' was brightest just before death. People saw it as an omen and believed that the stone was the cause. But the more likely explanation is that because opals are very sensitive to heat, the high fever in a person's final days caused the luster and light of the stone to grow stronger.

If this wasn't bad enough, Sir Walter Scott's novel about the fictional character Anne of Geierstein only made it worse. The stone was portrayed as evil and changed color with her moods: red when she was angry, blue when sad, and green when happy, then fading to an ashen gray when she died.

Superstitions were hard to shake. Only after Queen Victoria fell in love with their beauty did people consider wearing opals again. She gave them as gifts to her children and soon after their popularity was on the rise. Later the subdued beauty of Art Deco jewelry showcased opal perfectly as is shown in the Tiffany Opal Necklace, designed by L.C. Tiffany circa 1929. The black opals have a exquisite blue-green play-of-color.

Opals also complimented enamel and were open used together in decorative pieces.

In the play Twelfth Night, Shakespeare described opal as the queen of gems; it made sense then and is still true today.