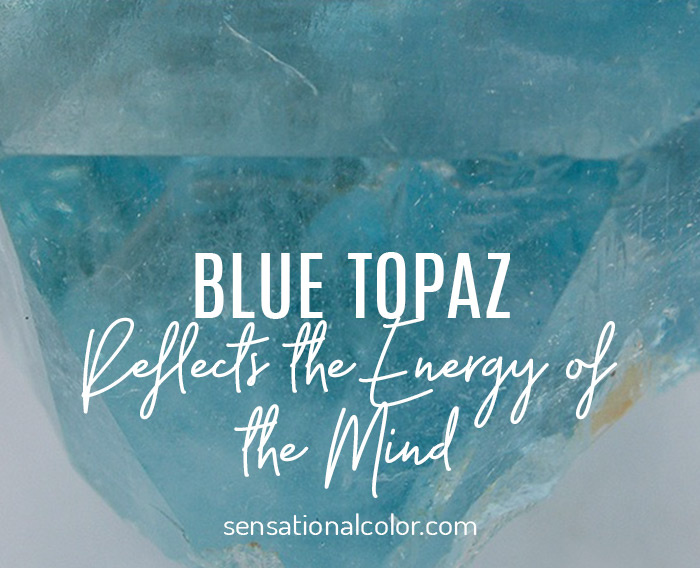 The last month of the year is a very festive and colorful time full of celebrations. In many parts of the world, it is a chilly month as well. If you are born in this merry month, you also have an exceptional December birthstone color – Blue Topaz. The perfect icy blue, it is reminiscent of the icicles one may find on a frosty morning. Blue topaz has also enjoyed a distinguished history. Ancient civilizations believed in these stones cooling properties. Named from the Greek word topazion that has Sanskrit origins – meaning "fire." Blue topaz was used to not only cool down a pot of boiling water but to cool hot tempers, as well as give comfort, bring peace, and improve reconciliation. These properties were said to be given to the stone by the sun god Ra.

The name is also thought to have come from Topazos, an Egyptian island in the Red Sea. When first discovered, the Egyptian believe it had the power to maintain peace, prosperity, and give protection. Topaz once found only on the Egyptian island, is now mainly mined in Burma, USA, China, Mexico, Nigeria, Australia, and the Minas Gerais regions of Brazil where artisanal mining rather than mechanized process are used to preserve the environment and protect the tribal population.

In South America, the stone is famous for its ability to dispel illness during the full moon night. The ancient Romans and Greeks valued topaz, too. They considered a prized gemstone, and some rulers wore jewelry made with blue topaz.

In the middle ages, the stone was a rare gem. In the 18th century, European aristocracy gave Brazilian topaz central importance in their legacy with magnificent beauties placed in royal crowns and jewelry.

In the mid-19th century, large deposits of topaz discovered in Brazil brought down the value. As a more affordable stone, blue topaz has become increasingly popular. 76.16 carat topaz on display at the Cleveland Museum of Art in Cleveland, Ohio.Image by Tim Evanson from Cleveland Heights, Ohio, USA [CC BY-SA 2.0]

Topaz comes in many hues. The subtle to vivid variations of blue topaz: Sky, Swiss, and London are all obtained by heat-treating. Whether natural or engineered, a gift of blue topaz is associated with love and fidelity and is a symbolic gift for couples celebrating sixteen years of marriage.

A large, brilliant blue topaz, The Marbella (originally called Topaz Azul), is now in Spain in a well-known natural heritage gem collection known as the Programa Royal Collection. It is the 7th largest blue topaz in the world, and the largest faceted treated blue topaz in the world. Much of the blue topaz you see in jewelry is colorless topaz that has been irradiated and heated to produce the beautiful blue.

Topaz is most often golden, colorless, or blue but is also other colors, such as deep red, pale gray, reddish-orange, pale green, and very rarely pink.

As for the hard facts about topaz, it is a silicate mineral that has aluminum and fluorine in it. On the Mohs hardness scale, it registers at 8. It is known to be a hard stone that is tougher and harder than sapphire and tanzanite.

The popularity of blue topaz continues. Catherine, Duchess of Cambridge, is known to be a fan of the stone. She is often seen wearing blue topaz earring to different social occasions.

Blue topaz makes a statement as a cocktail ring. The shade of blue stands out beautifully against any color of a gown or cocktail dress, making it a versatile piece for special occasions.

This topaz ring is one of my favorite designs – 'Thorn Branch' ring it is cast from a rose branch in sterling silver and set with a faceted round sky blue topaz. The December birthstone color of glacier blue is perfect for warming the heart of someone near and dear.