George Bernard Shaw to the Pop of Color Quote by Unknown

These shareable graphics include two of my favorites, which are both from unknown sources -- Why Color? and Be a Pop of Color quote and many more from famous people like Frank Sinatra, John Sloan, and Zoltan Szabo. 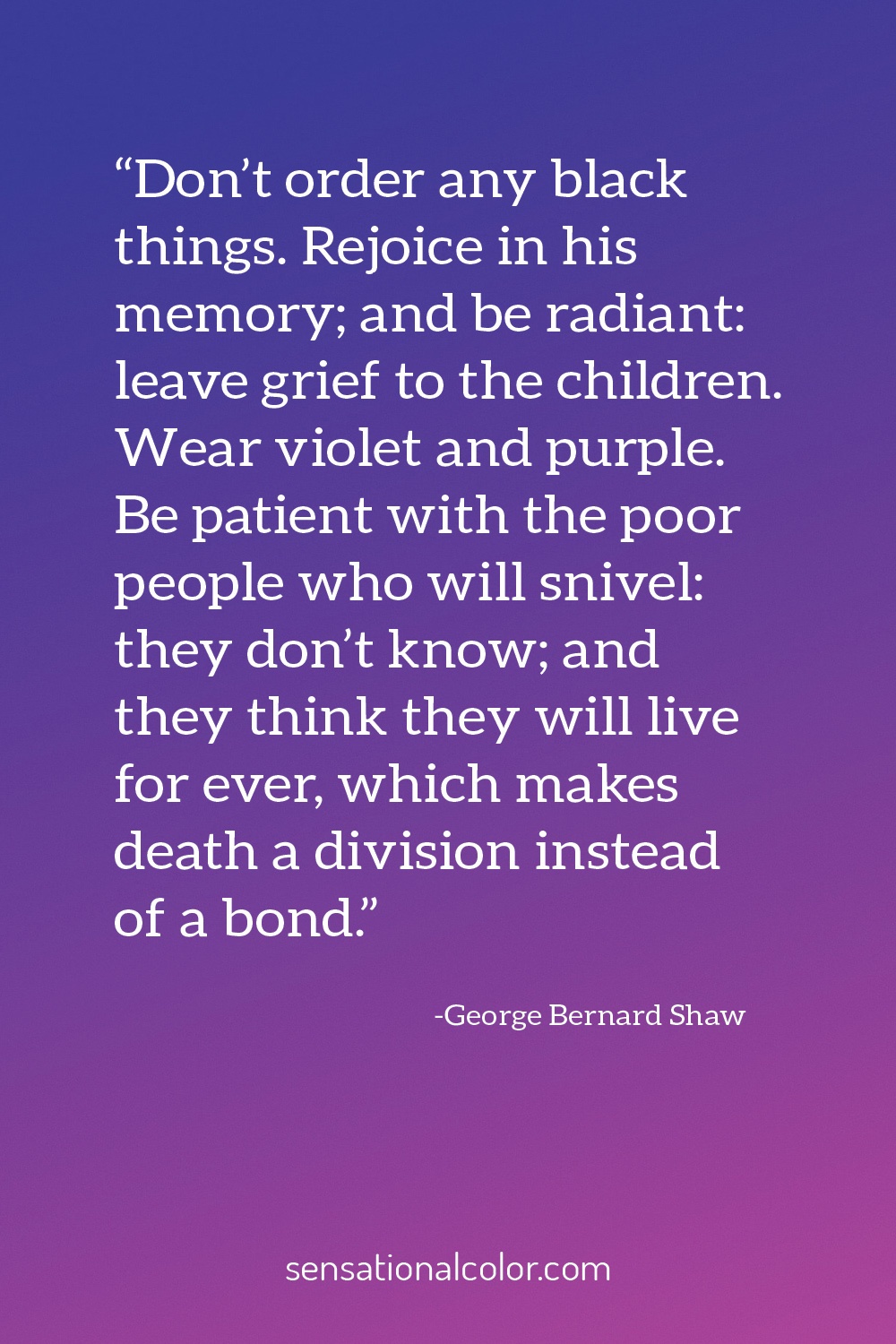 “Don’t order any black things. Rejoice in his memory; and be radiant: leave grief to the children. Wear violet and purple. Be patient with the poor people who will snivel: they don’t know; and they think they will live for ever, which makes death a division instead of a bond.” -- George Bernard Shaw, Irish born playwright who lived most of his life in London, England, 1856-1950 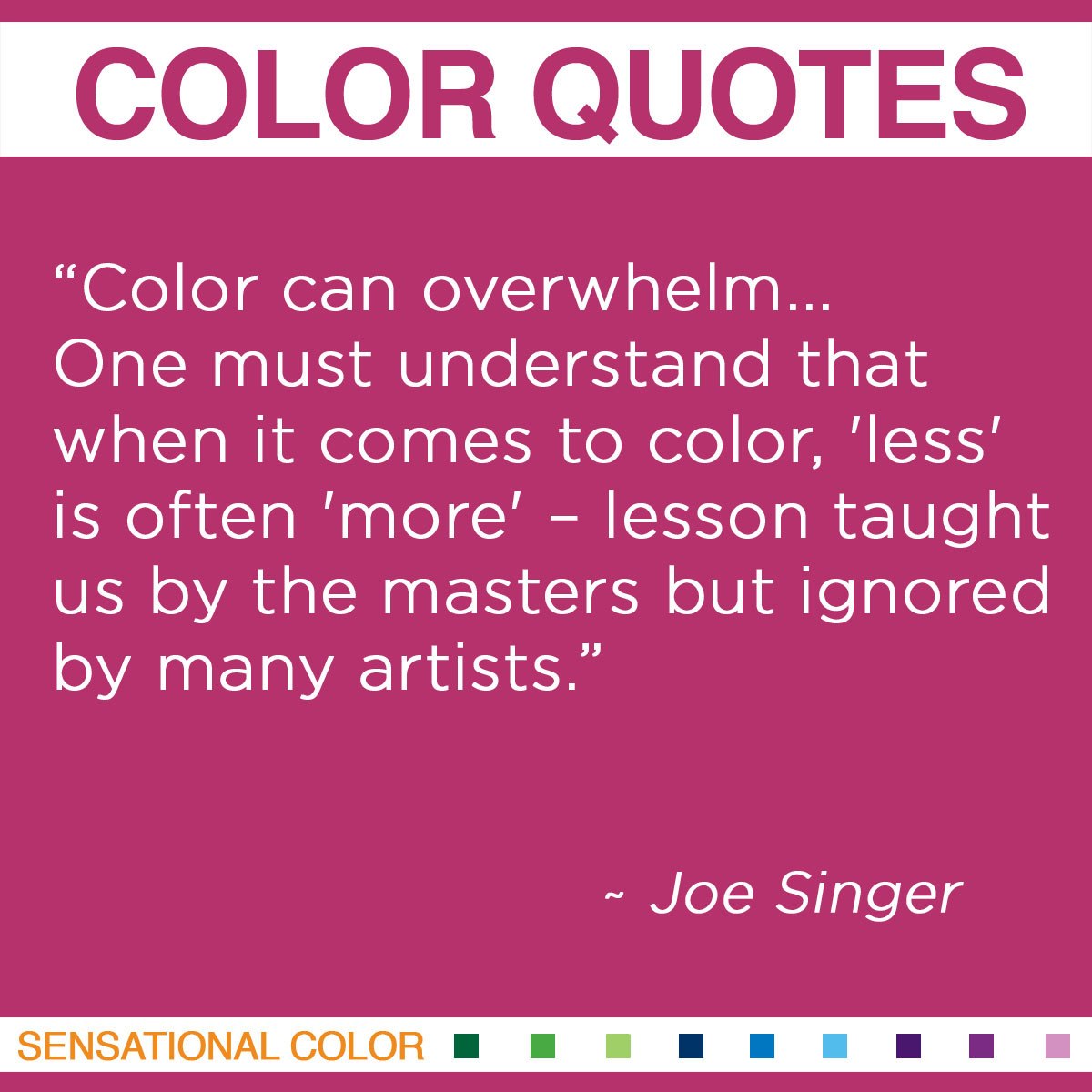 ​“Color can overwhelm… One must understand that when it comes to color, ‘less’ is often ‘more’ – lesson taught us by the masters but ignored by many artists.” -- Joe Singer, Portrait Artist 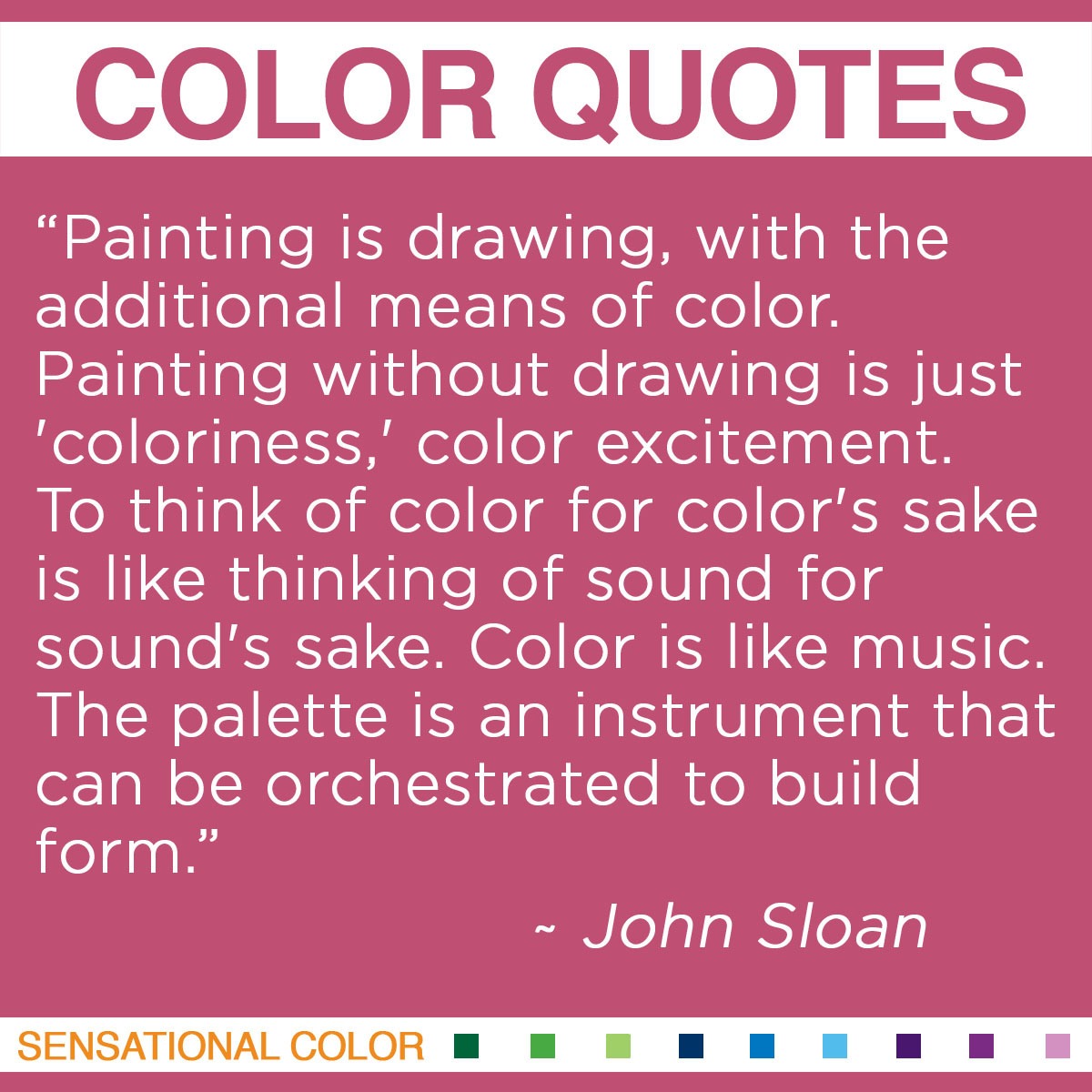 ​“Painting is drawing, with the additional means of color. Painting without drawing is just ‘coloriness,’ color excitement. To think of color for color’s sake is like thinking of sound for sound’s sake. Color is like music. The palette is an instrument that can be orchestrated to build form.”  -- John Sloan, American painter, etcher and one of the founders of the Ashcan school of American art, 1871-1951 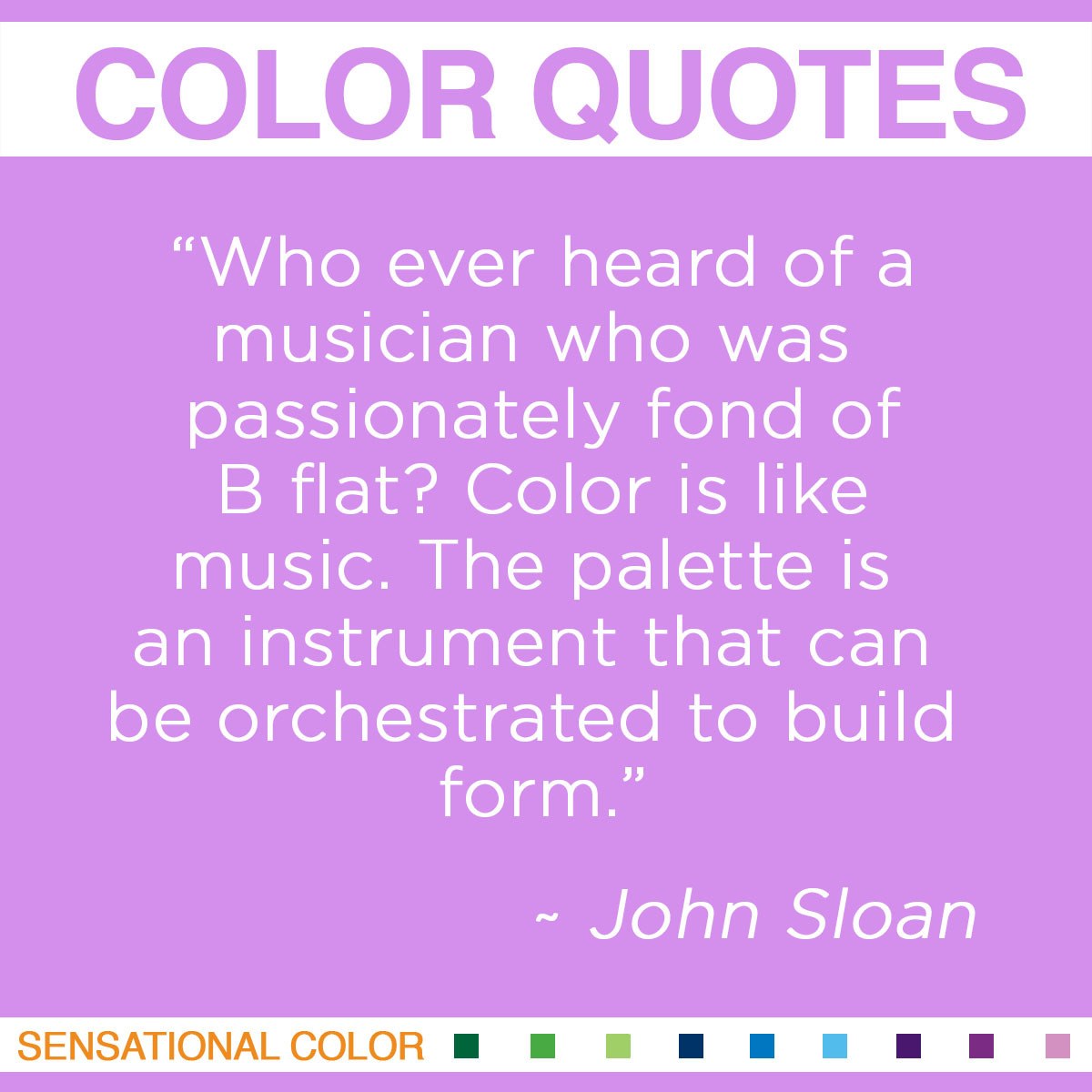 ​“Who ever heard of a musician who was passionately fond of B flat? Color is like music. The palette is an instrument that can be orchestrated to build form.” -- John Sloan, American painter, etcher and one of the founders of the Ashcan school of American art, 1871-1951 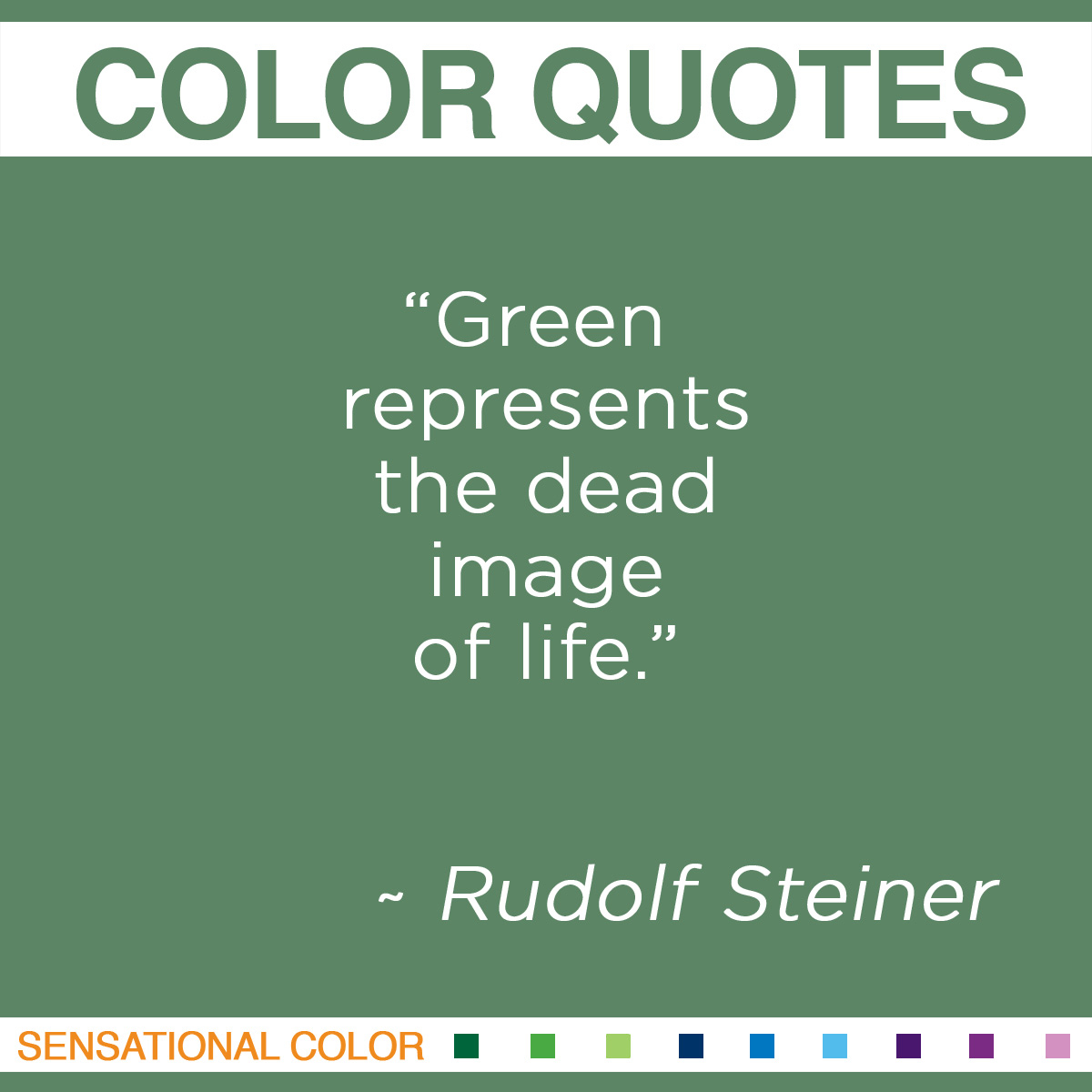 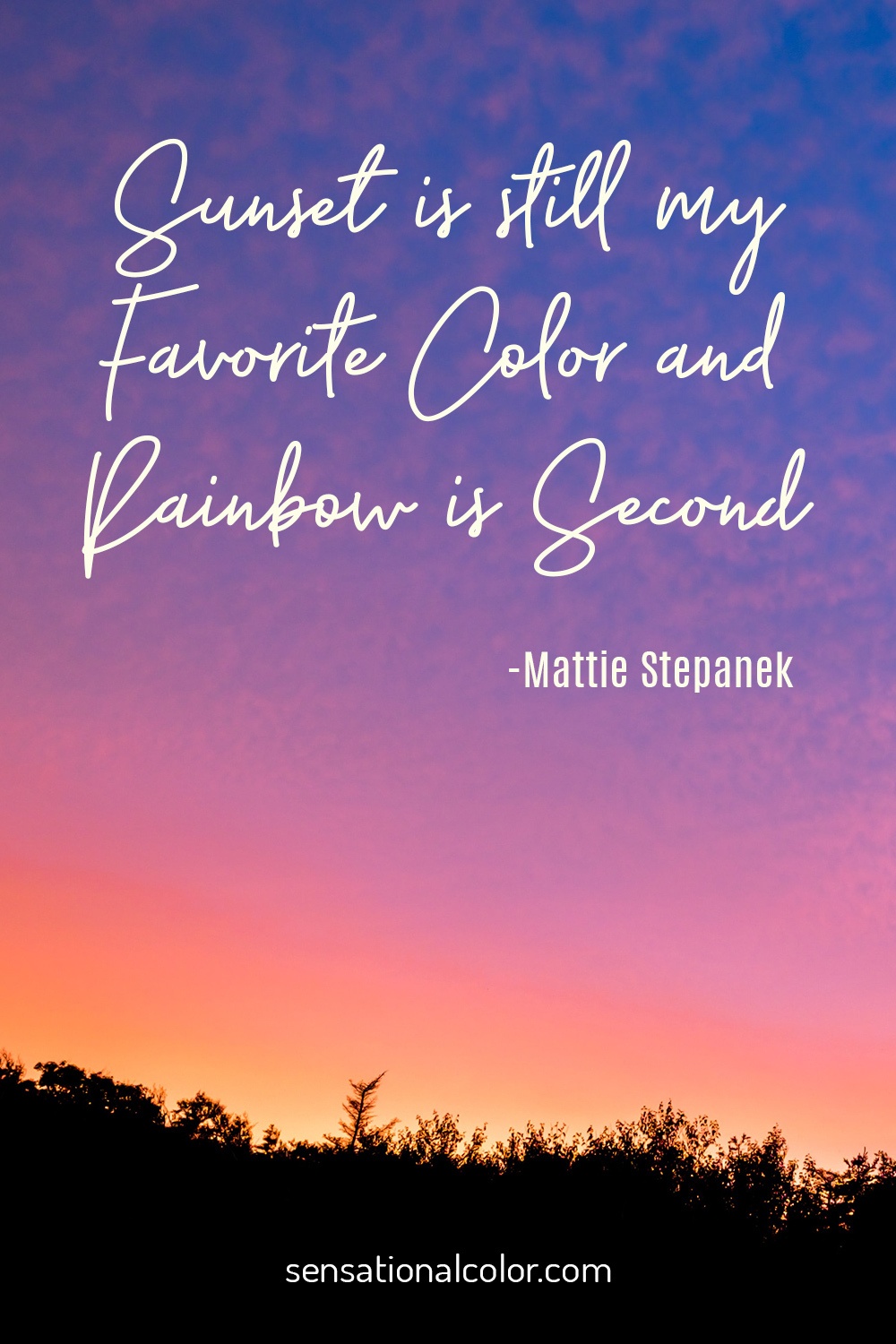 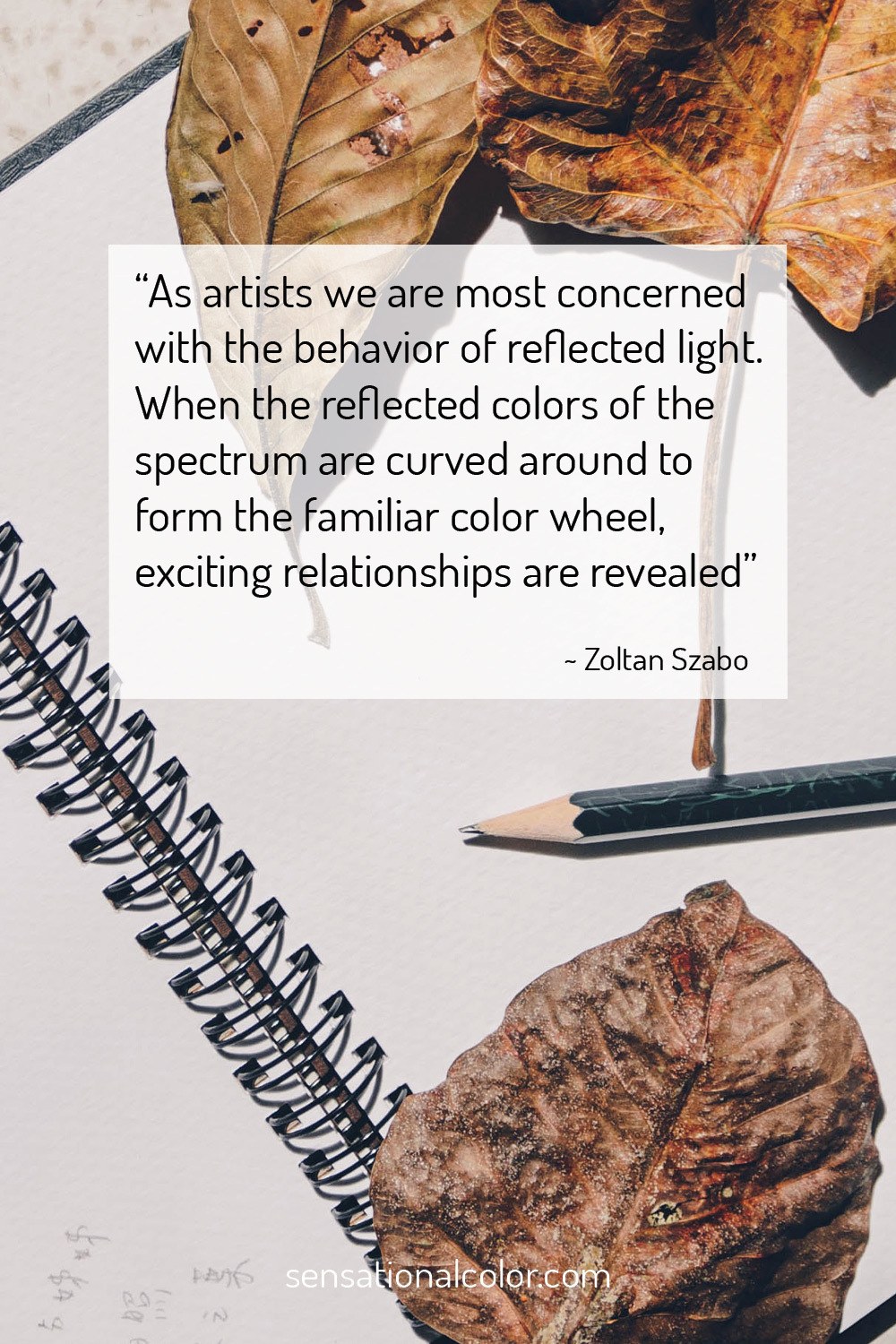 “As artists we are most concerned with the behavior of reflected light. When the reflected colors of the spectrum are curved around to form the familiar color wheel, exciting relationships are revealed.” -- Zoltan Szabo, Hungarian-born American Painter, 1928-2003 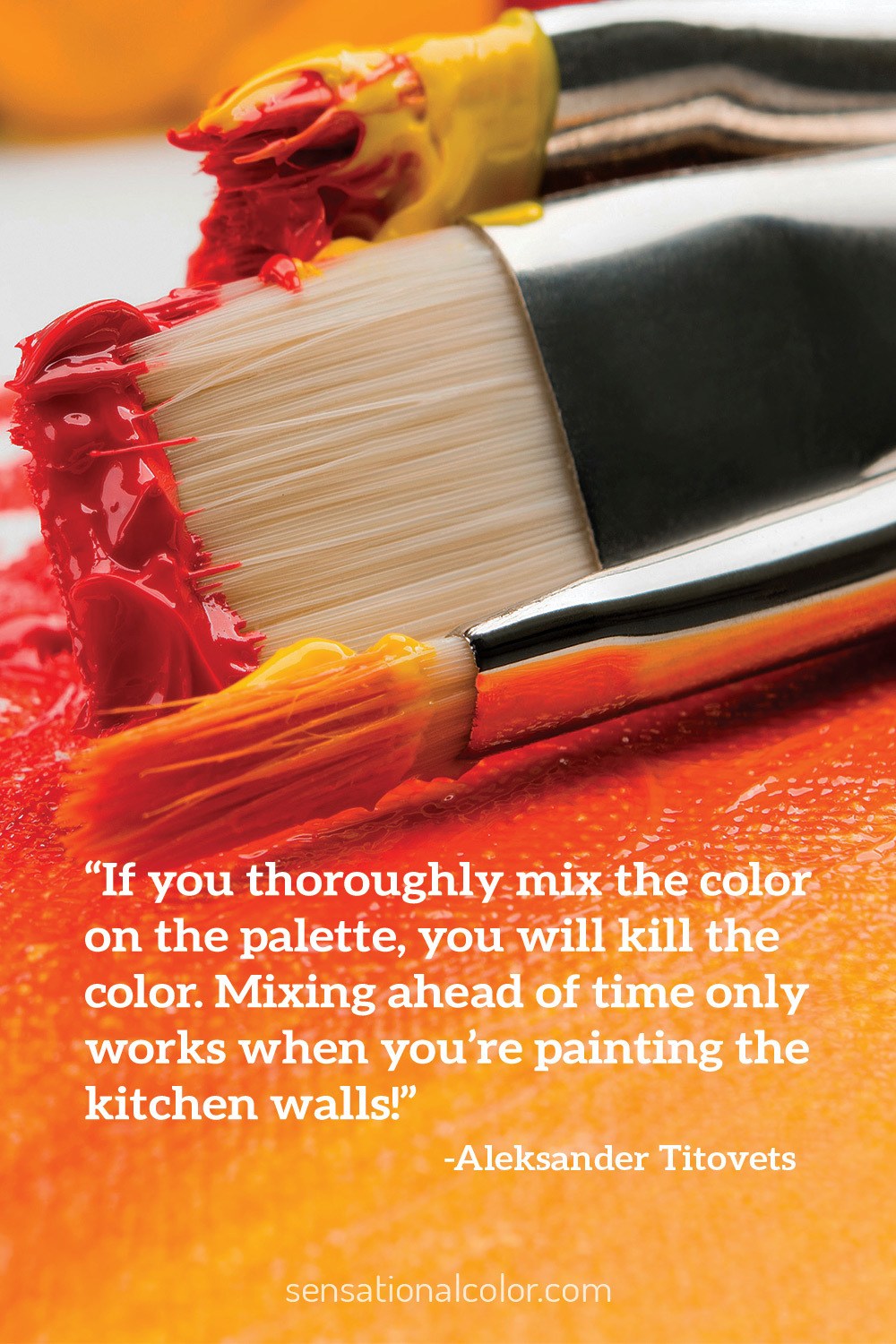 “If you thoroughly mix the color on the palette, you will kill the color. Mixing ahead of time only works when you’re painting the kitchen walls!” -- Aleksander Titovets, Russian Painter, b. 1960 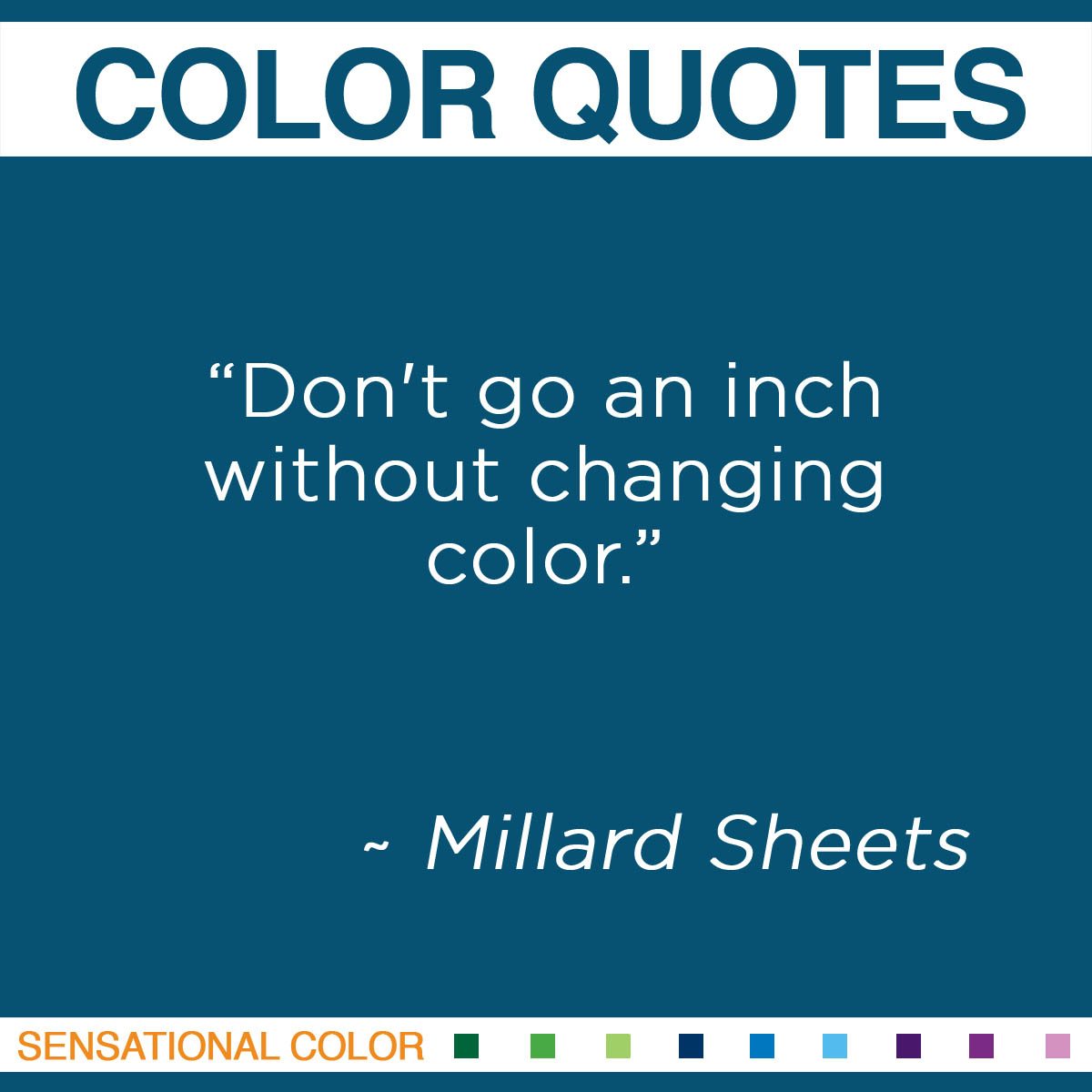 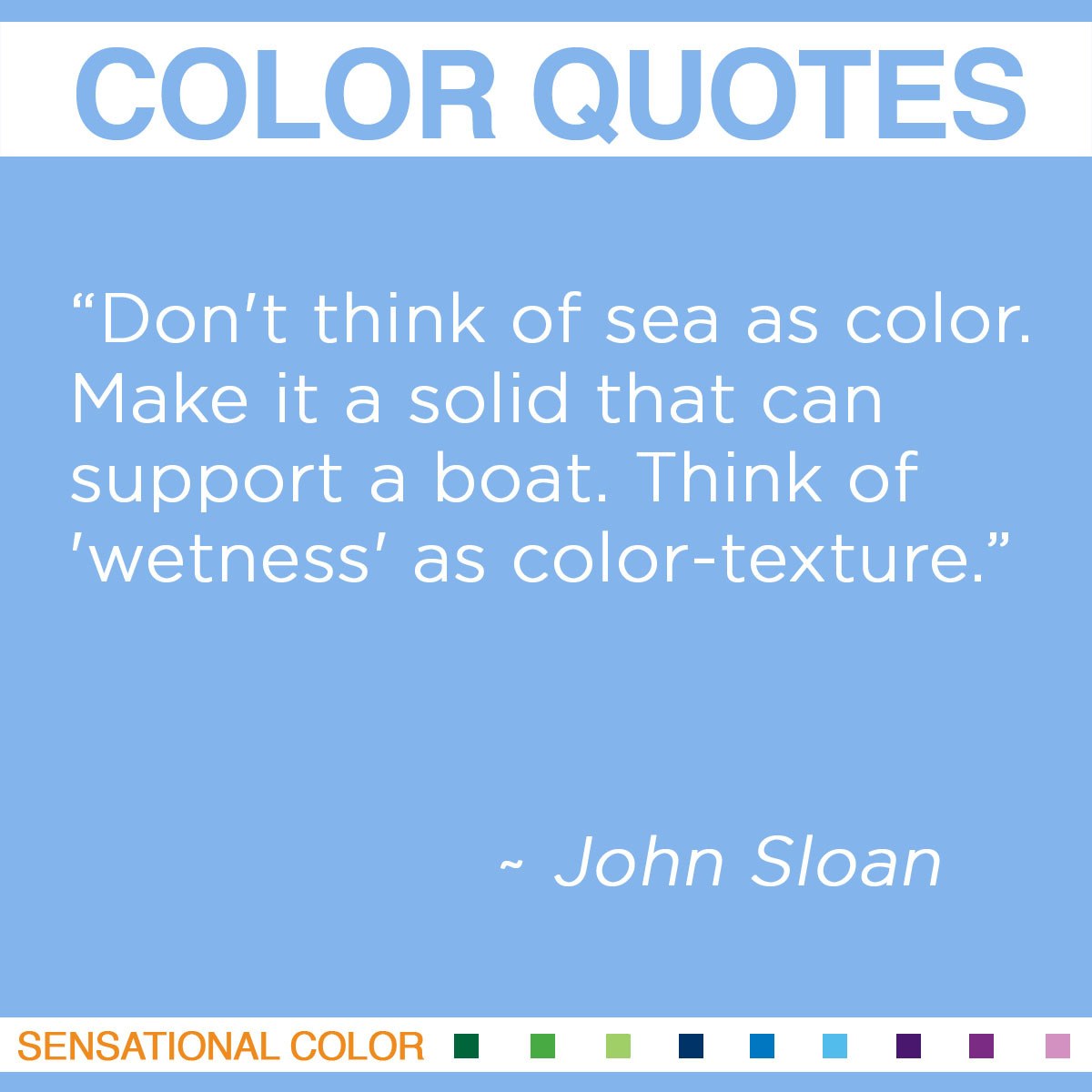 ​“Don’t think of sea as color. Make it a solid that can support a boat. Think of ‘wetness’ as color-texture.” -- John Sloan, American painter, etcher and one of the founders of the Ashcan school of American art, 1871-1951 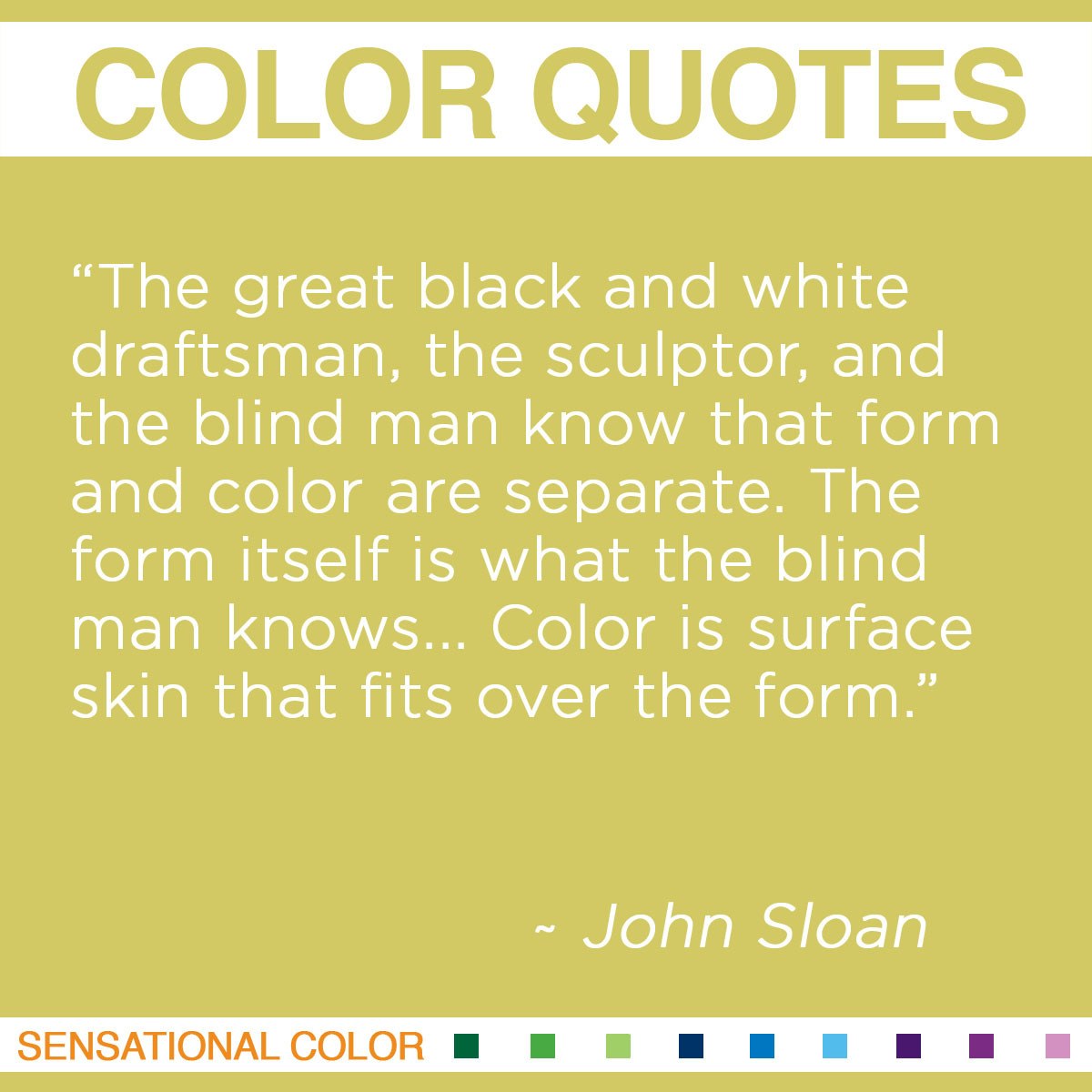 ​“The great black and white draftsman, the sculptor, and the blind man know that form and color are separate. The form itself is what the blind man knows… Color is surface skin that fits over the form.” -- John Sloan, American painter, etcher and one of the founders of the Ashcan school of American art, 1871-1951 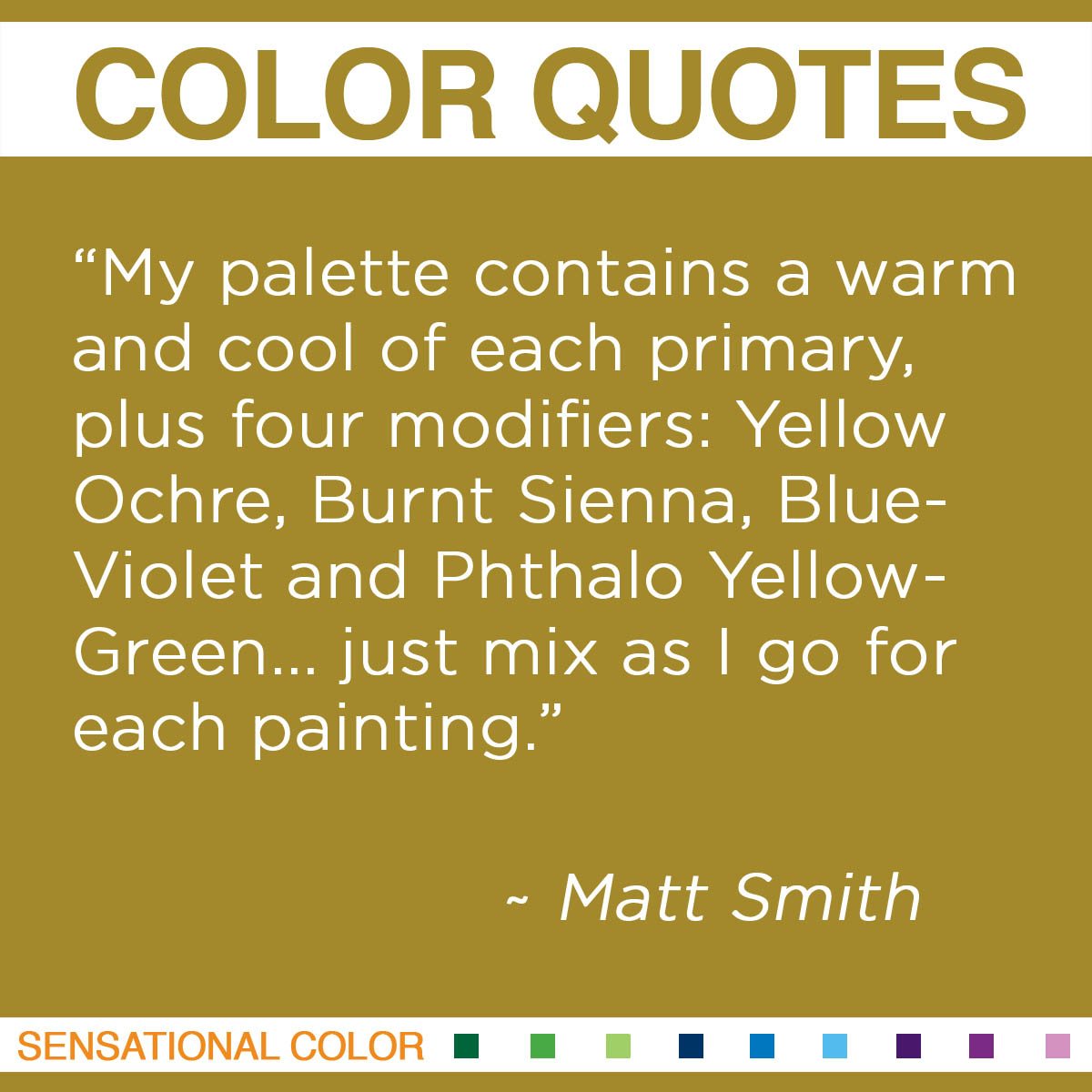 “My palette contains a warm and cool of each primary, plus four modifiers: Yellow Ochre, Burnt Sienna, Blue-Violet and Phthalo Yellow-Green… just mix as I go for each painting.” ~Matt Smith, American Painter, b. 1960 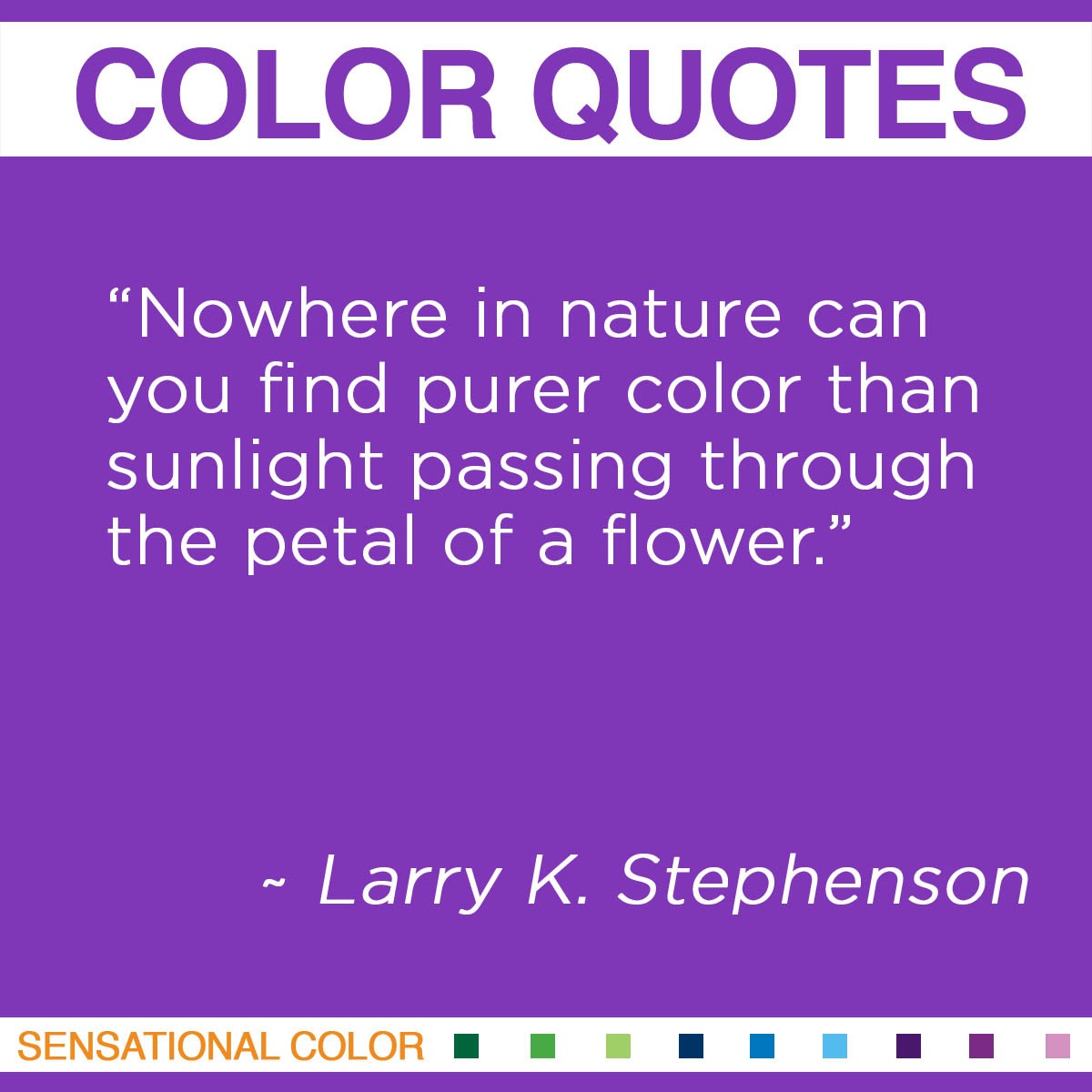 ​“Nowhere in nature can you find purer color than sunlight passing through the petal of a flower.” -- Larry K. Stephenson, American Painter 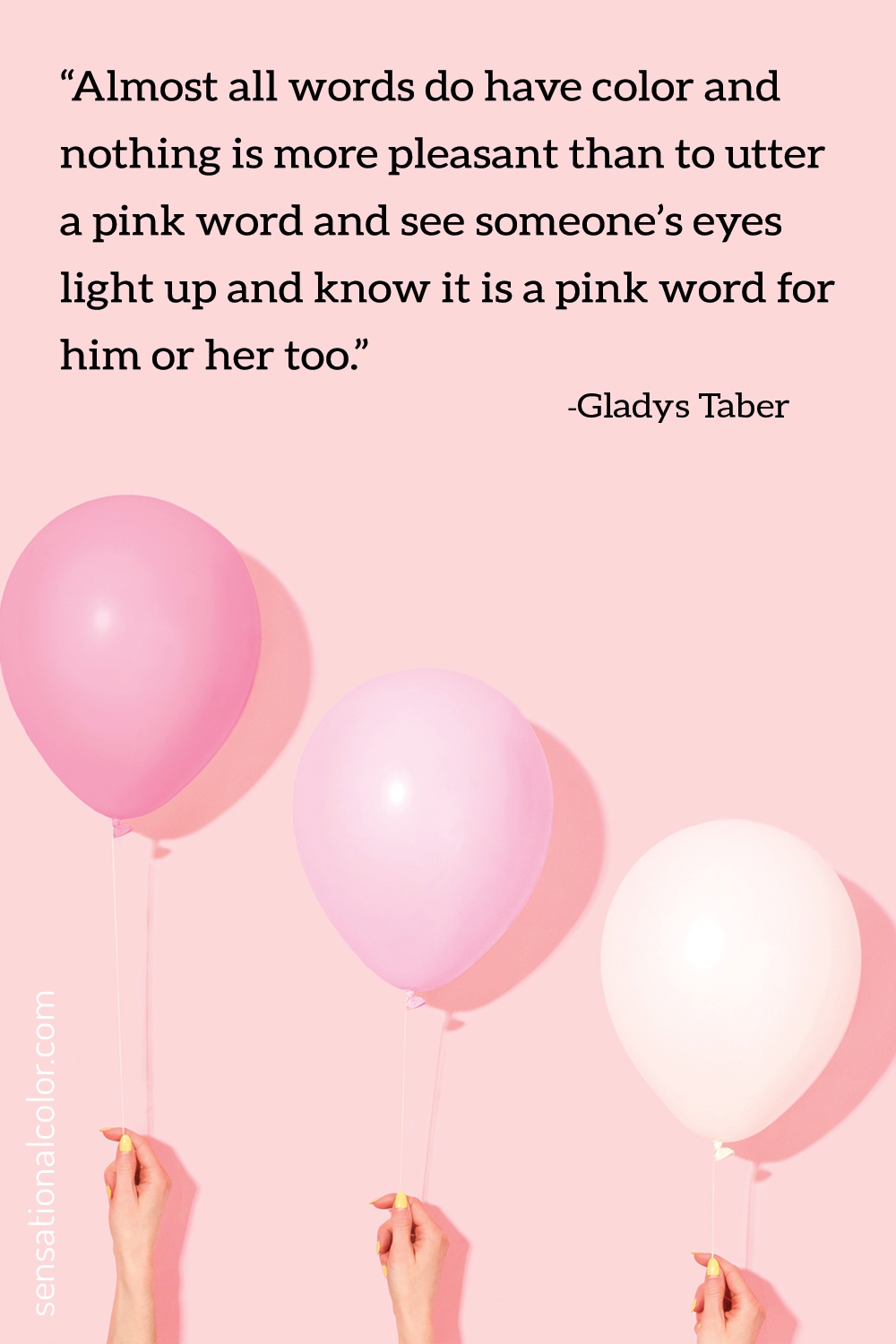 ​“Almost all words do have color and nothing is more pleasant than to utter a pink word and see someone’s eyes light up and know it is a pink word for him or her too.” -- Gladys Taber, American Columnist and author of 59 books, 1899–1980 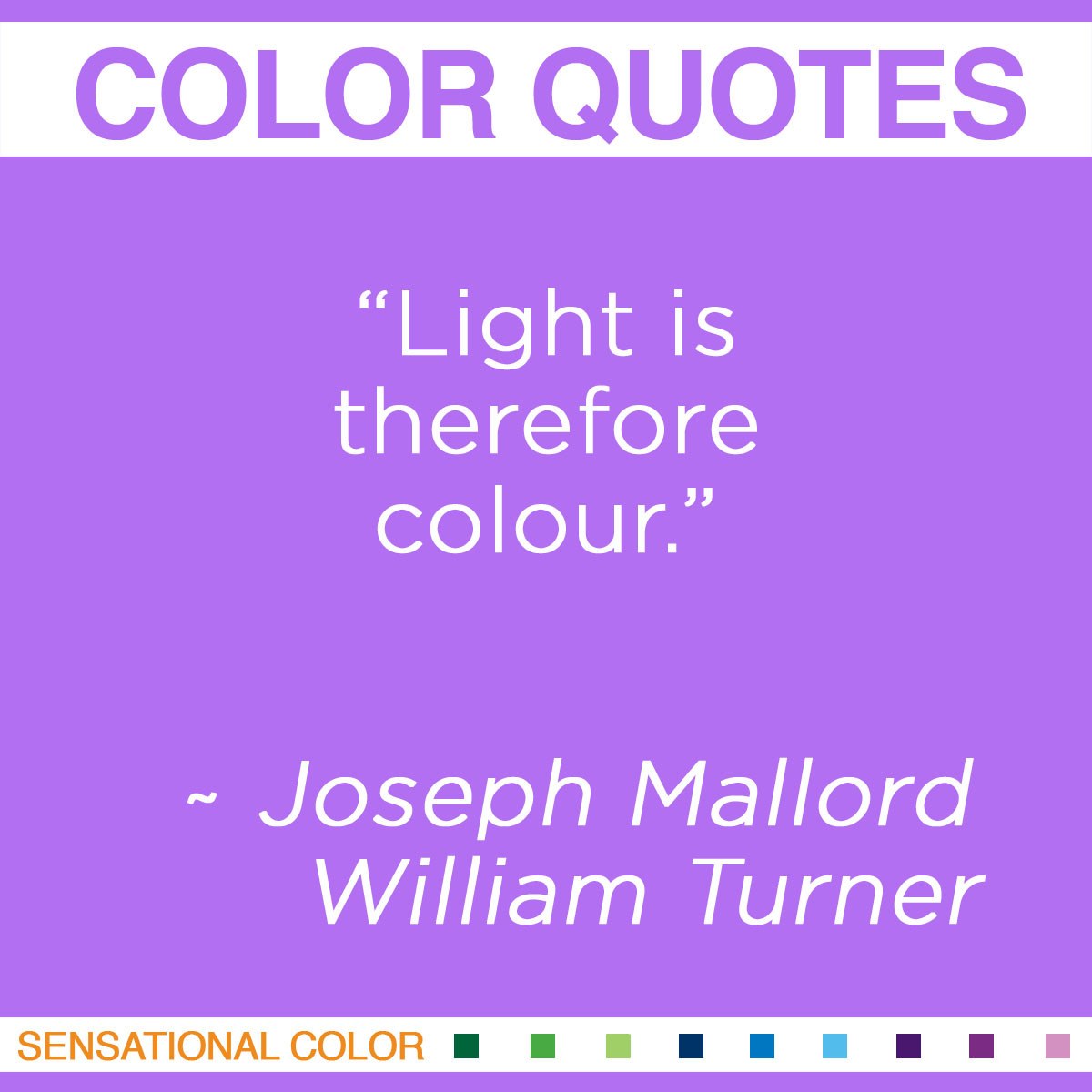 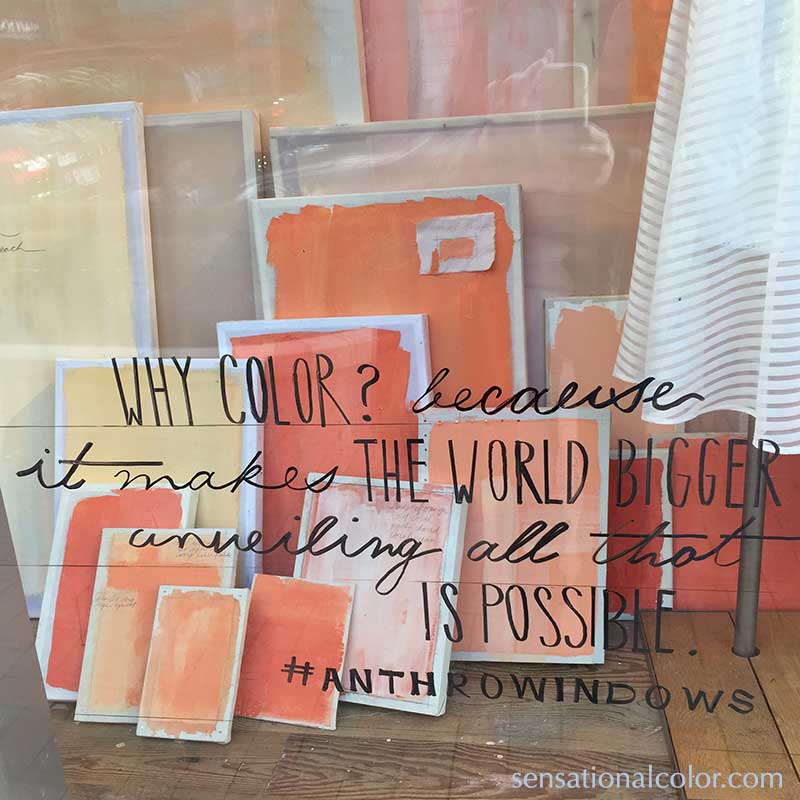 “Why color? Because it makes the world bigger unveiling all that is possible.” -- Unknown 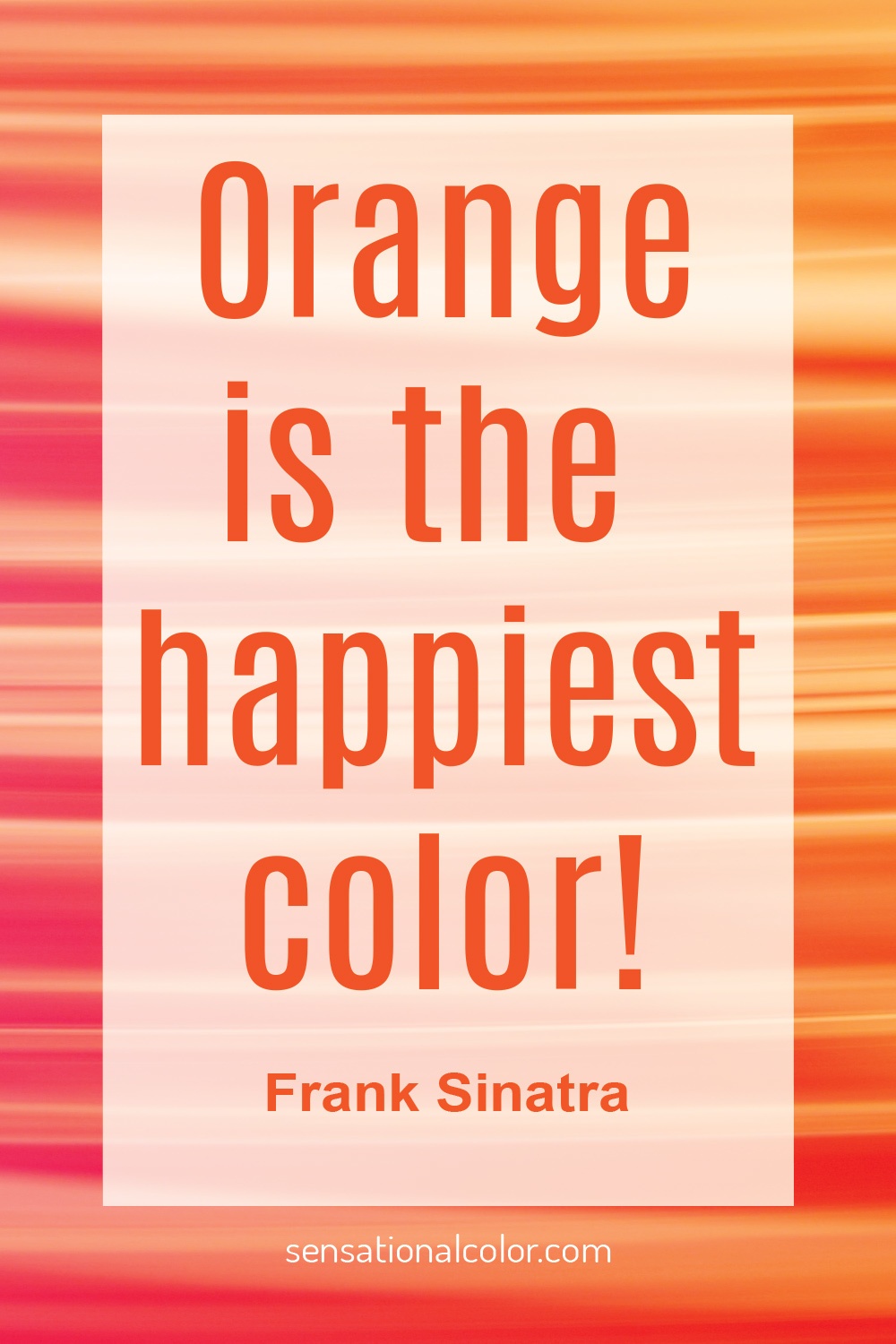 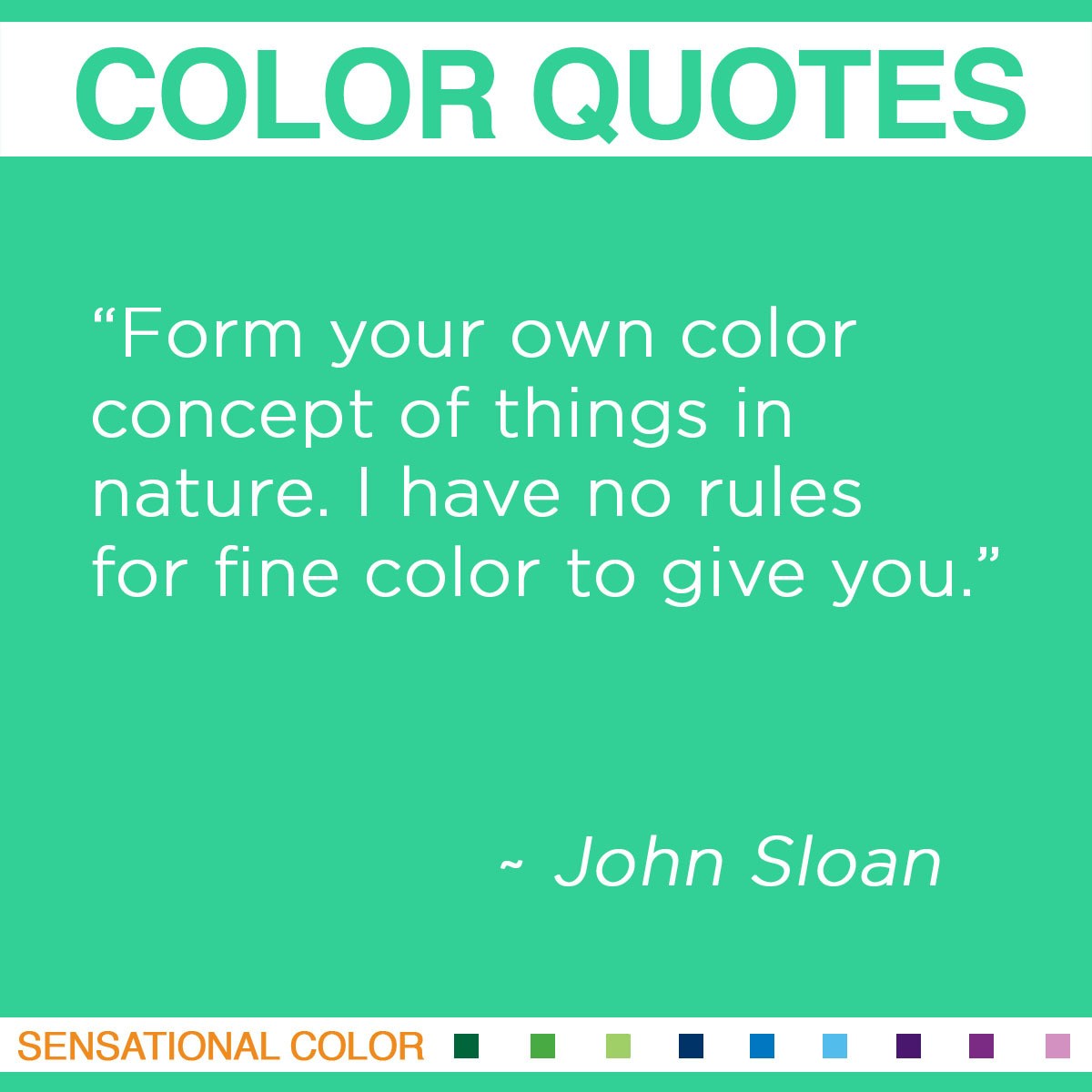 ​“Form your own color concept of things in nature. I have no rules for fine color to give you.” -- John Sloan, American painter, etcher and one of the founders of the Ashcan school of American art, 1871-1951 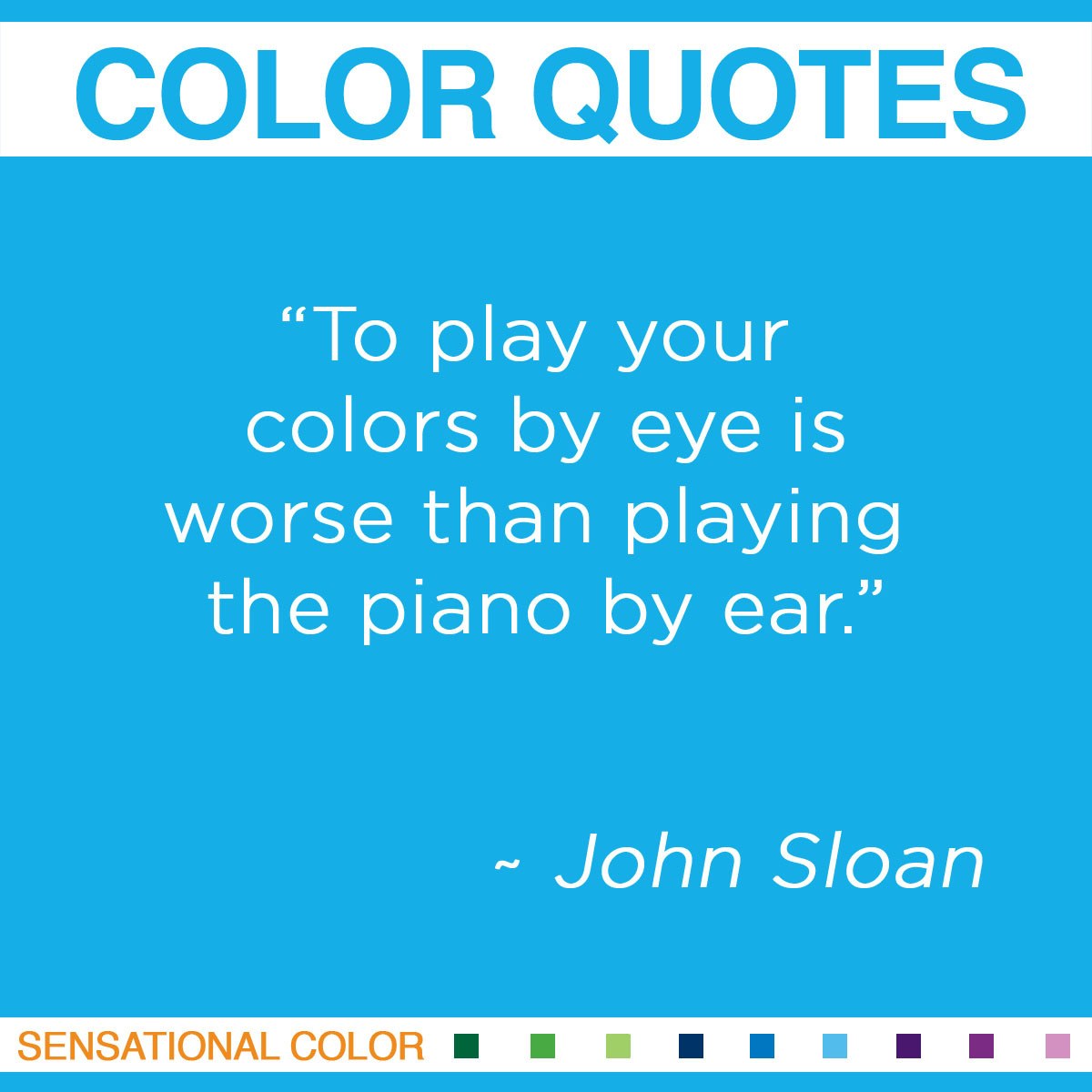 ​“To play your colors by eye is worse than playing the piano by ear.” -- John Sloan, American painter, etcher and one of the founders of the Ashcan school of American art, 1871-1951 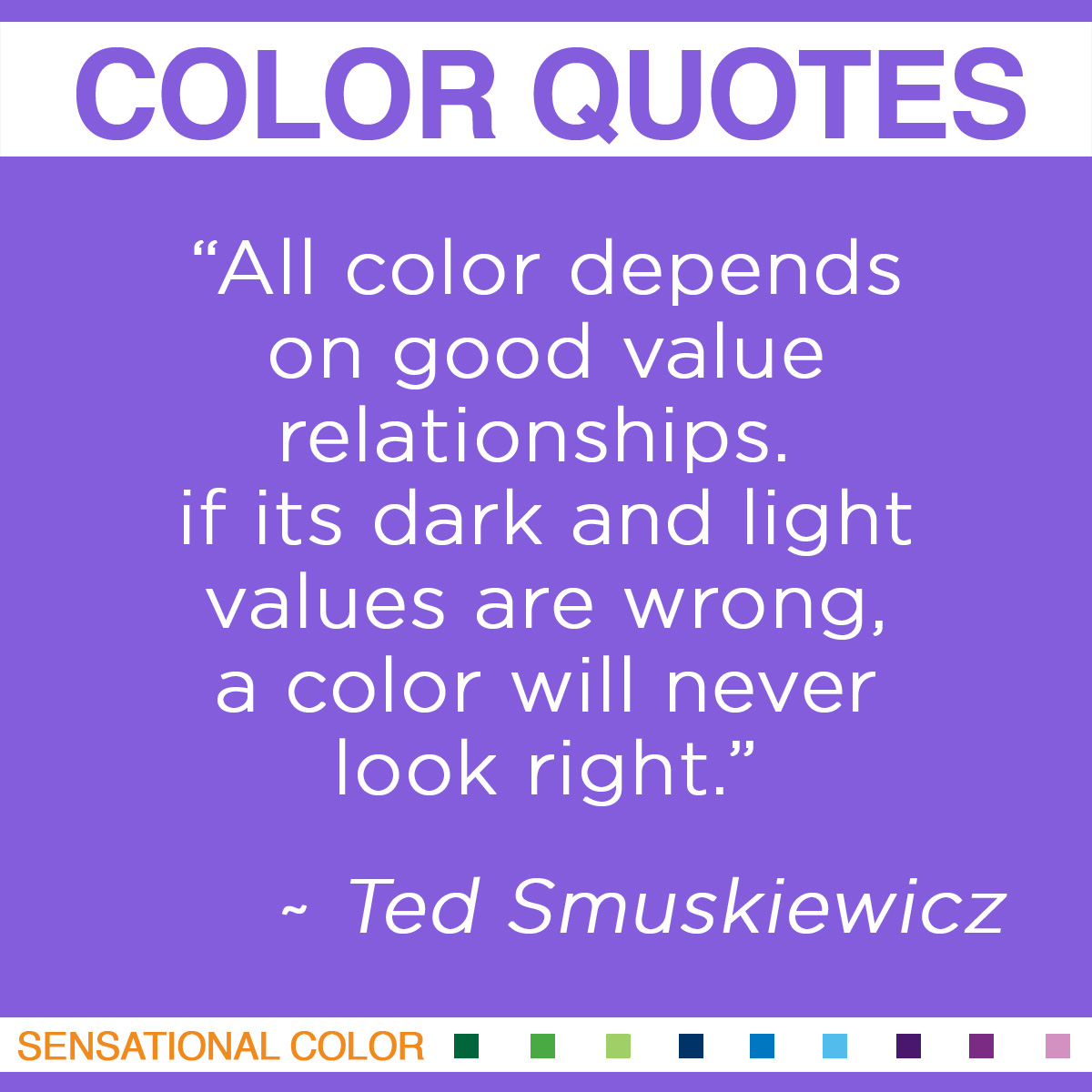 “All color depends on good value relationships. If it's dark and light values are wrong, a color will never look right.” ~ Ted Smuskiewicz, American Artist, b.1946 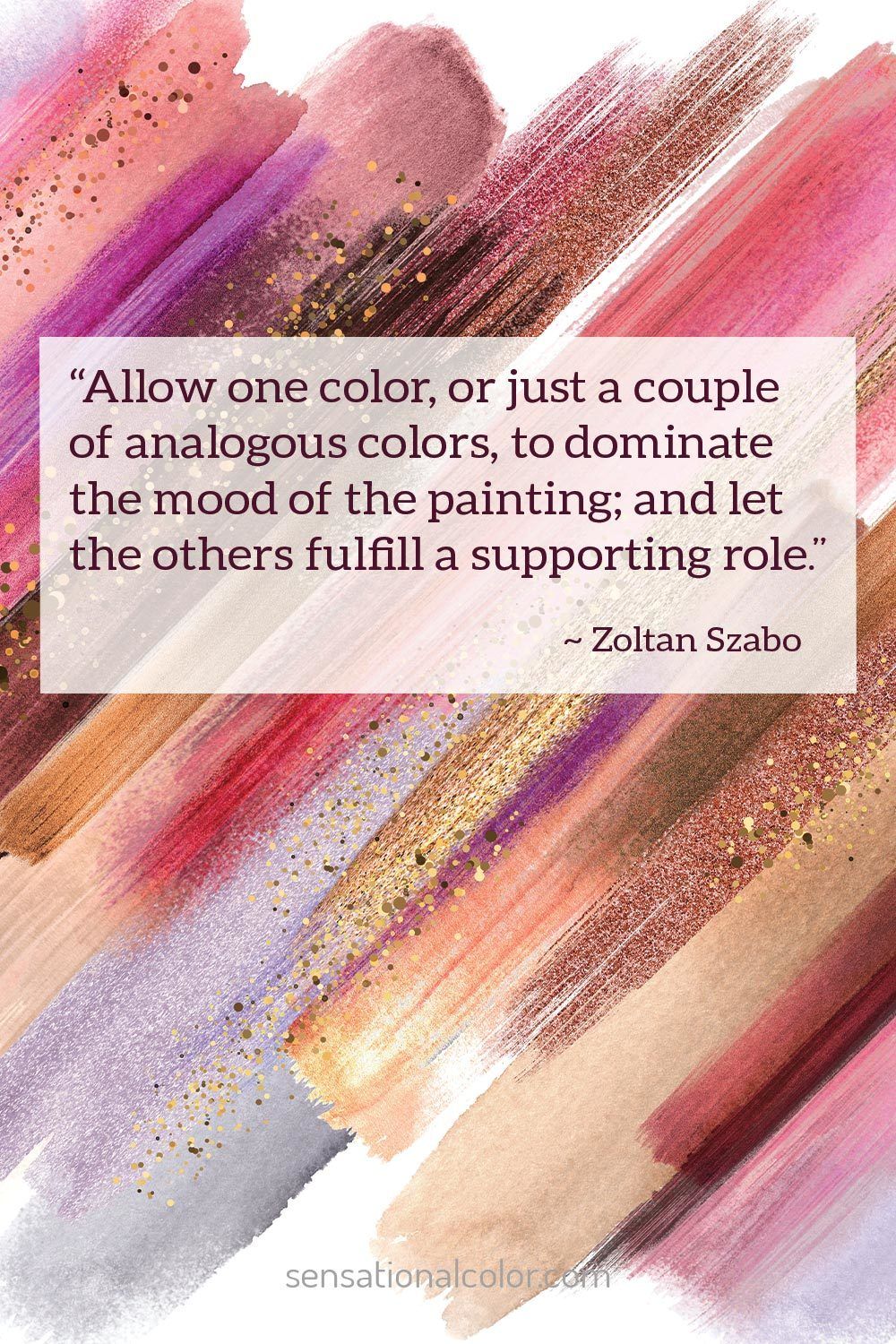 “Allow one color, or just a couple of analogous colors, to dominate the mood of the painting; and let the others fulfill a supporting role.” ~ Zoltan Szabo, Hungarian-born American Painter, 1928-2003 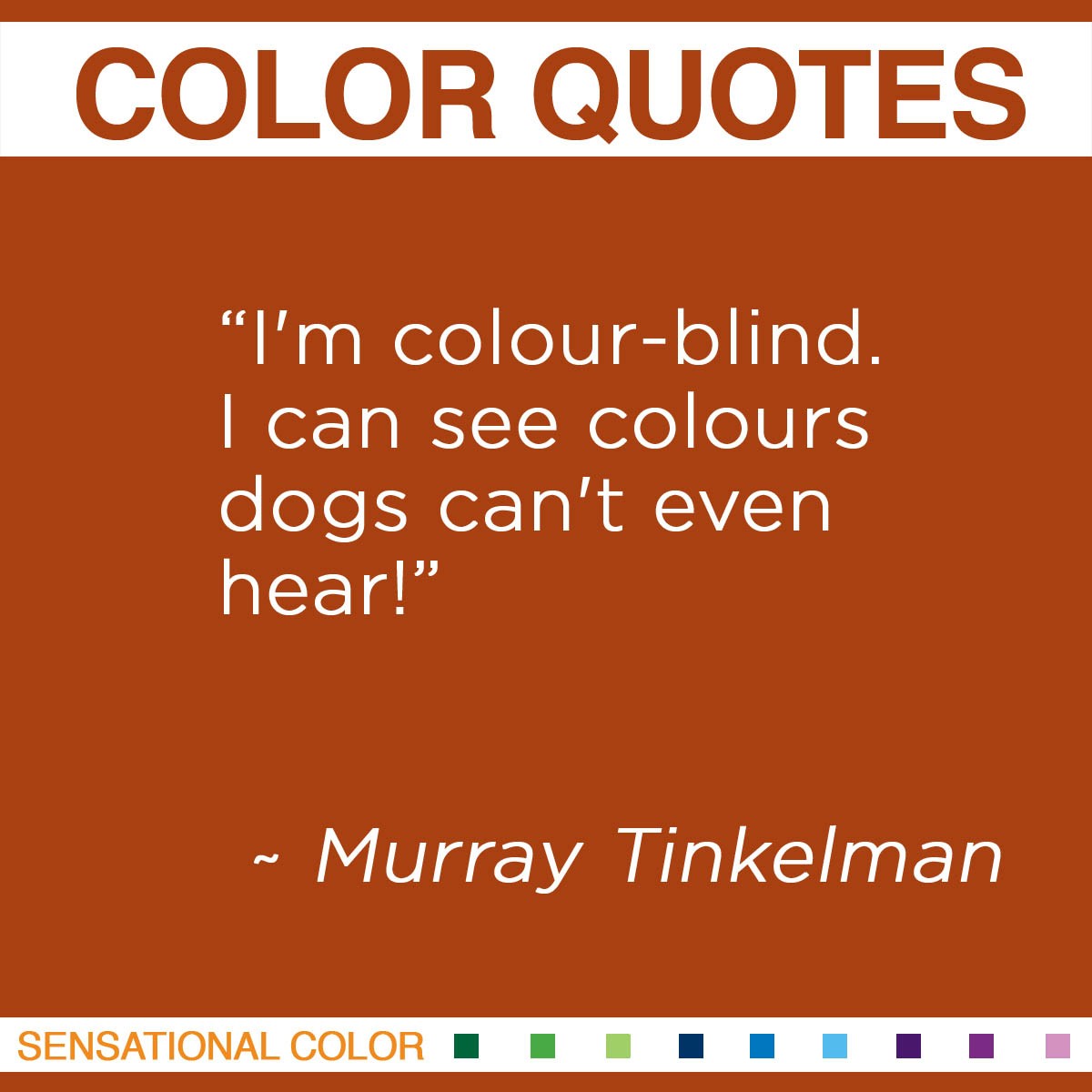 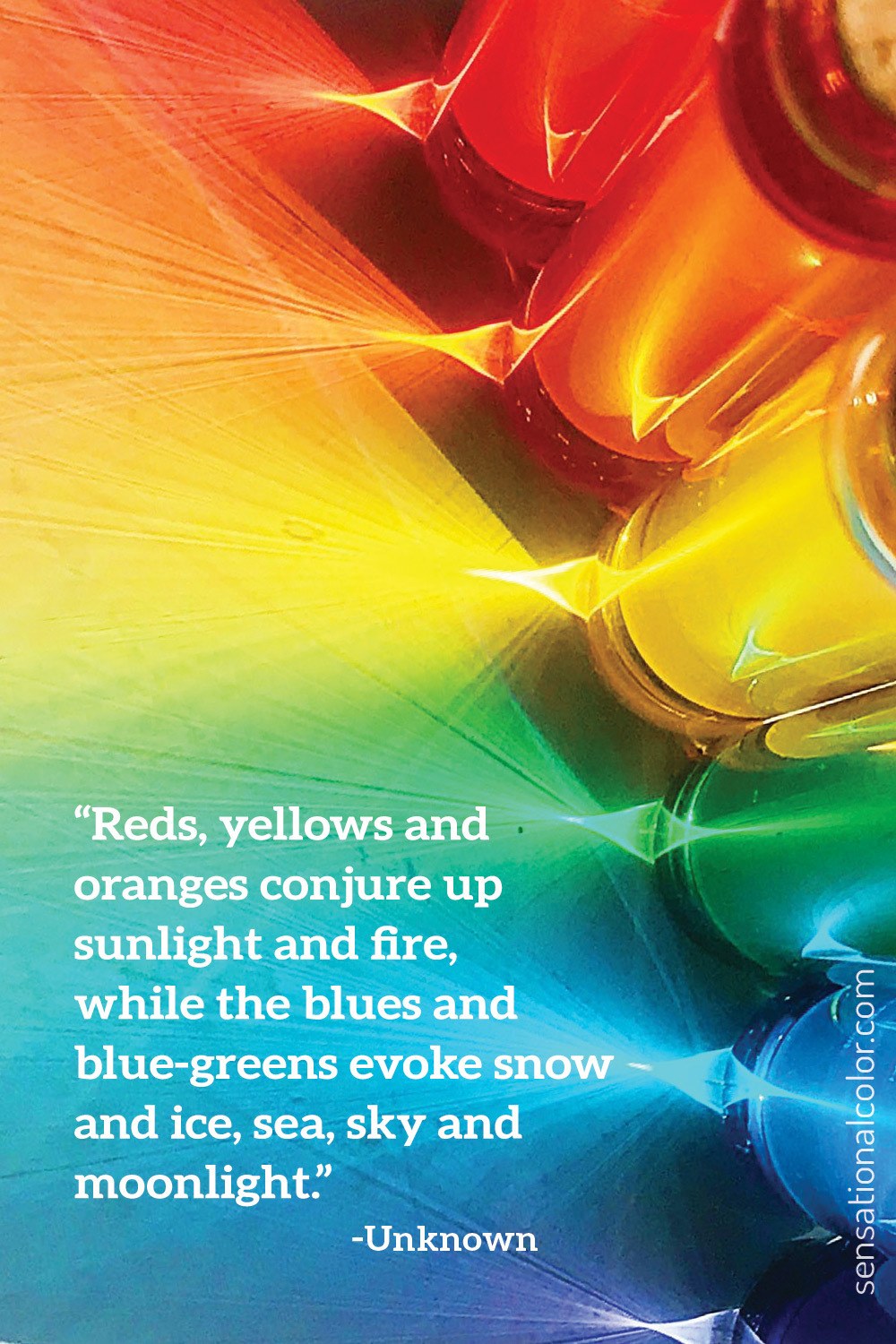 “Reds, yellows and oranges conjure up sunlight and fire, while the blues and blue-greens evoke snow and ice, sea, sky and moonlight.” -- Unknown 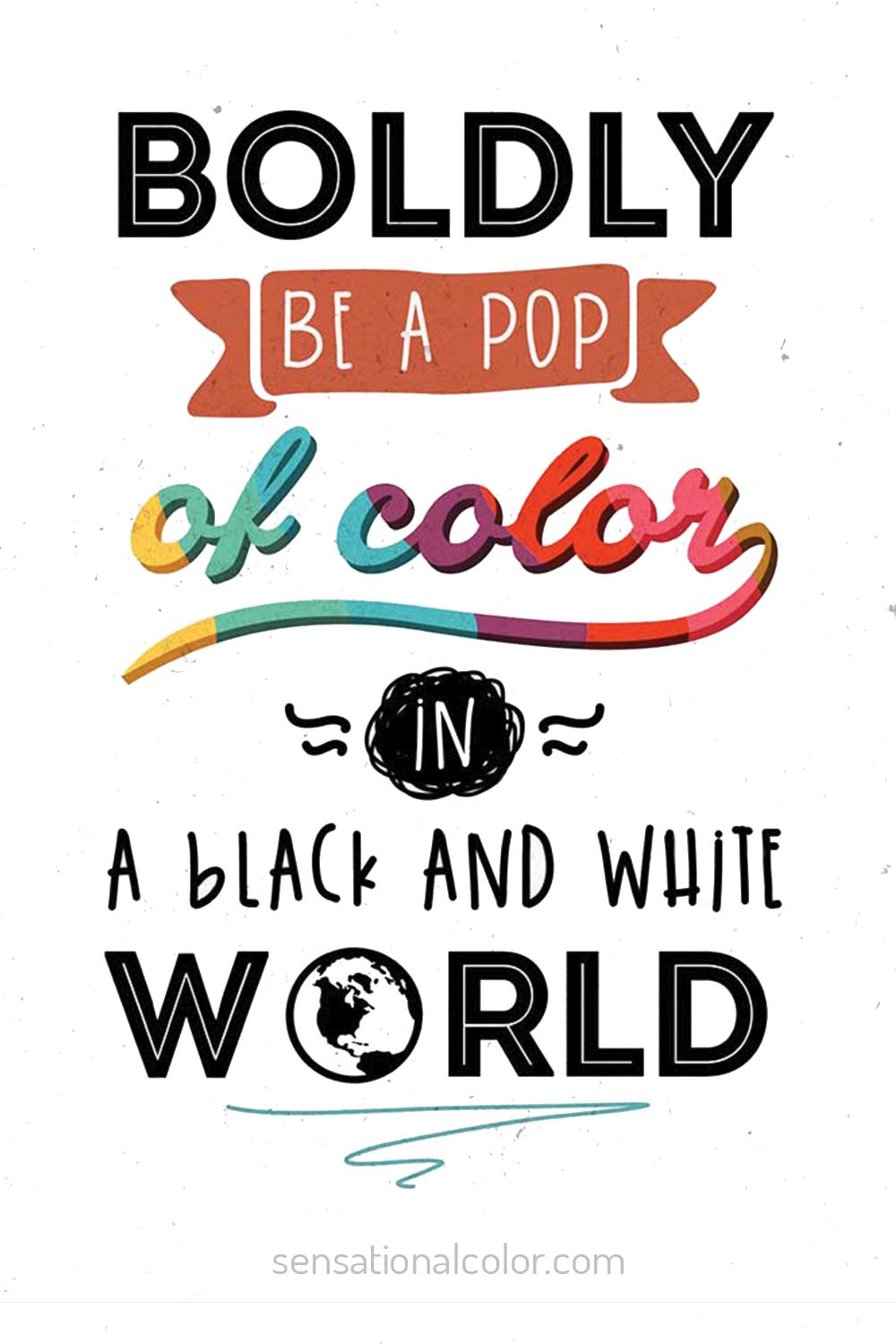 In our Color Resources area, you will find a free, printable mini poster of this quote. It is downloadable as a print quality PDF in your choice of two sizes - 8.5" x 11" or A4. The mini does not include any branding or watermark that will print out on your poster making it perfect for anywhere you need inspiration. 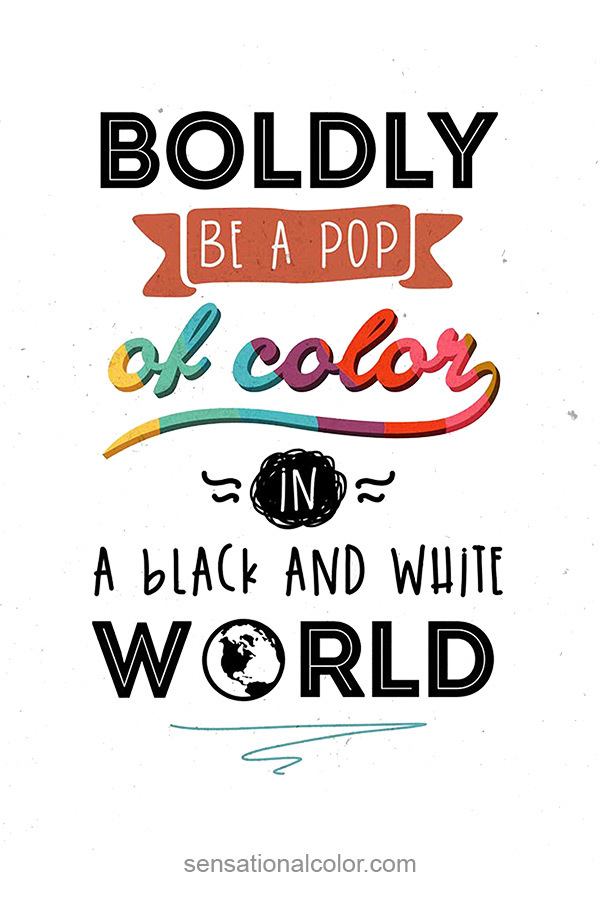 Grab the "Be a Pop of Color..." Mini Poster Now

This mini poster is being shared under
Attribution-NonCommercial-ShareAlike 4.0 International (CC BY-NC-SA 4.0)

Do You Like the Why Color? Quote and Pop of Color Quote as Much as I Do?

Leave a comment to let me know. Do you have a favorite quote?