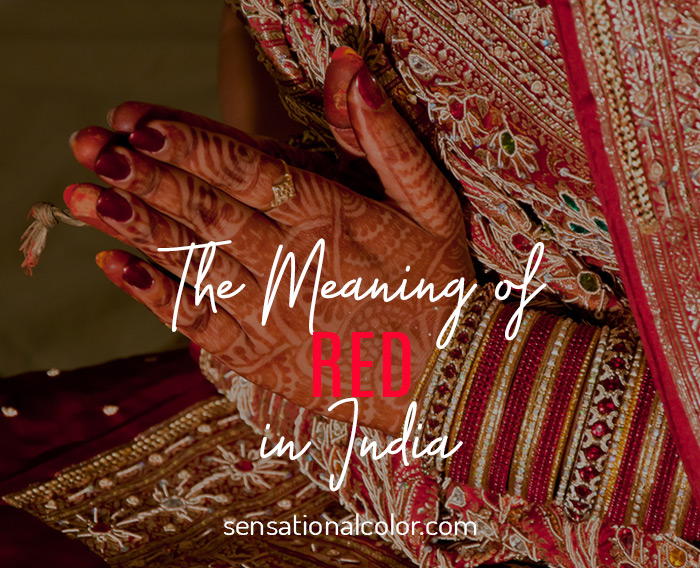 The color of love, seduction, and power, red has been symbolic in many a culture. A dynamism innately aligned with the color has been interpreted and followed across the globe.

The devilish connotations of red in the West are an amusing juxtaposition to the traditional bearings of red meaning in the East.

Red Meaning For The Married Woman

The color red has played an instrumental role in Hindu customs and beliefs, perhaps the most significant one being in the life of a married woman.

The almost red henna on her hands and the pinch of red powder sindoor on her head symbolically marks a girl's arrival into her role as a married woman.

Wedded bliss and a promise of togetherness are all sealed by the warmth and binding power of the red drape and red accessories. The bride's first step into her new home begins with the ritual of dipping her feet in red water and walking bare feet on the floor of the house to symbolize the beginning of her new role. Cinema in India reflects this homegrown custom of Indian brides bedecked in red bangles and saris, and the ceremonial kiosk showered with red roses. It's almost the most potent symbol of leaving behind one's adolescence and stepping into womanhood and, eventually, motherhood.

The red vermillion is also used as a ritual mark while greeting guests or family members at a festival or into your home. The red tilaka is also a symbol of 'blessing' from an elderly to a youngster and is part of other customary functions. The customs include traditional Indian festivals such as Raksha Bandhan (the festival that celebrates the bond between brothers and sisters) and Durga Puja.

Red Meaning: Tilaka and Bindi Similar But Not Synonymous

The tilaka has to do with the third eye of Lord Shiva, the destroyer, one of the most revered Indian gods and part of the Trinity. The third eye is in tandem with Lord Shiva's third eye opening to beckon the end of the world. However, its customary significance is that of the all-seeing, all-pervading power that protects the inner wisdom of those to whom it is applied. The red tilaka may be replaced by a tiny red dot on the foreheads of married women to symbolize spirituality.

Paste or powder is used to apply a tilaka. The tilaka adorns the forehead for religious or spiritual reasons, or to honor a personage, event, or victory.

A bindi s a Hindi term. tilaka applies to all of India. A bindi may be a paste, a sticker, or even jewelry and can signify marriage, or be simply for decorative purposes. The bindi, in particular, is a symbol of feminine energy and supposed to protect both the wife and the husband. Although bindis have gone far from the traditional red circle, tradition and customs keep it alive at many places.

It is also a part of Indian custom to tie a long red string around the wrist of loved ones during prayer as a mark of protection and to safeguard against the evil eye. Individuals wear it for a month till the thread wears off.

Red in mythology denotes bravery, protection, and strength. Red powder is often showered on deities at temples during prayer. The colored powder, therefore, has become a hugely intrinsic part of Indian culture.

Indian customs and culture are riots of colors with almost every color thrown in for good measure. But red remains the core symbol of power and spirituality, protection and commitment. It is a color that has not faded the trials of time and stands alone as the most powerful.

The sexual denotations of the red in the West are almost opposite of the simplicity, purity, and ritualistic candor of the color in the East. The dynamism of red has always led it to command power and awe. It's interesting, however, to see how different cultures utilized the color in their daily lives.

Red in India is considered holy and is symbolic of a specific time, place, and action in one's personal life. While castes, beliefs, and rituals may differ across religious sects in India, the overall implications of the color are universal.