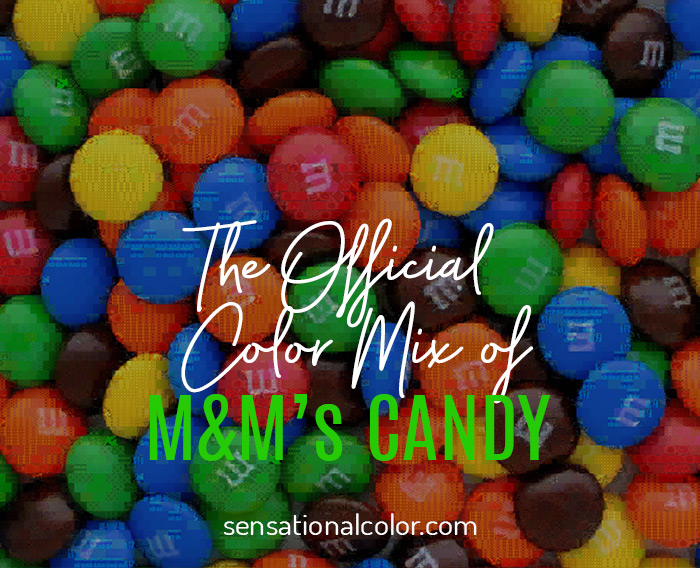 When I first began sharing my love and knowledge of color online, I was surprised at how many people contacted me asking if I knew the percentage of each color in a bag of M&Ms. Why all of the curiosity about the mms color mix?

I thought the first inquiry was just a random question, the second email a coincidence but by the third I sent the information I had along with a query of my own.

"What prompted you to ask about the mms color mix?

The answer uncovered something that I hadn't considered. Homework! Teachers were using the color distribution in a bag of M&M's as a way to engage students in learning statistics.

Yikes, was I helping them to cheat on their math homework? Perhaps. Or maybe they just wanted to confirm their answers before turning in the completed assignment.

Either way, for all of the students and curious candy lovers everywhere here is what I know about the distribution of colors in a bag of M&M's plain chocolate candies but I can't guarantee this is still correct so do your homework!

According to the company each large production batch is blended to the ratios specified above and mixed thoroughly. However, since the individual packages are filled by weight on high-speed equipment, and not by count, it is possible to have an unusual color distribution.

I found a document from 2008 (does not appear to be online any longer https://www.exeter.edu/documents/mandm.pdf) that outlines how the company decided what ratios of colors are used.

Our color blends were selected by conducting consumer preference tests, which indicate the assortment of colors that pleased the greatest number of people and created the most attractive overall effect.

Tan M&Ms Officially Kicked Out of the Bag

When Mars, Inc. decided to replace tan M&Ms they gave they ask the candy eating public to choose the new color. Those interested in casting a vote for the new hue were asked to call 1-800-FUN-COLOR and cast one vote between pink, blue or purple. The power of being able to have a say in the new color inspired over 10 million people to pick up the phone and cast a vote.

Prior to replacing Tan with Blue the mms color mix was:

NOTE: The M&Ms website no longer posts the proportions of mms color mix found in each bag of M&Ms. The information above is the mms color mix that was posted in 2007. You will have to conduct your own study to verify that these % were still accurate today. Maybe you can build your own M&Ms sorting machine to help you complete the count.

Red out and back in again--

1987 was a very important year in the history of M&M'S® Brand, as red was returned to the traditional color mix—due to overwhelming request from consumers. LiveScience answered the question, Why Were Red M&M's Discontinued for a Decade?

Blue wins by a landslide--

In 1995—over a half-century after the candies were first introduced—consumers across America helped write a new chapter in the history of M&M'S® Brand. A "mega" marketing event asked Americans to vote for a new color to appear in the traditional M&M'S® Chocolate Candies color mix. Their choices included blue, pink and purple—or no change. Blue won by a landslide, with 54% of the more than 10 million votes cast.

A kaleidoscope of colors--

In 1996, M&M'S® Brand introduced M&M'S® COLORWORKS®—a veritable kaleidoscope of over 20 brilliantly colored M&M'S® Chocolate Candies. M&M'S® Brand Chocolate Candy lovers could create, for the very first time, their own personalized color blends to add their unique touch of color to each special occasion.

Where did the color go--

2004 opened with a bang and a surprise. Just before the clock struck, Red and Yellow were partying with the world's oldest teenager, Dick Clark, on his New Year's Rockin' Eve special. But at midnight, something unprecedented happened—Red, Yellow, and the rest of the M&M'S® Chocolate Candies lost their color!

Everyone wondered, "Will the colors come back?" Luckily, industrious M&M'S® Chocolate Candy lovers all over the country searched for and found the missing colors, after two and a half months of Black and White M&M'S® Chocolate Candies. Color's triumphant return on March 11, 2004 was marked by a grand celebration in Los Angeles, where voices could be heard exclaiming, "Chocolate is Better in Color!"™

See more fun facts about M&M's at their website.