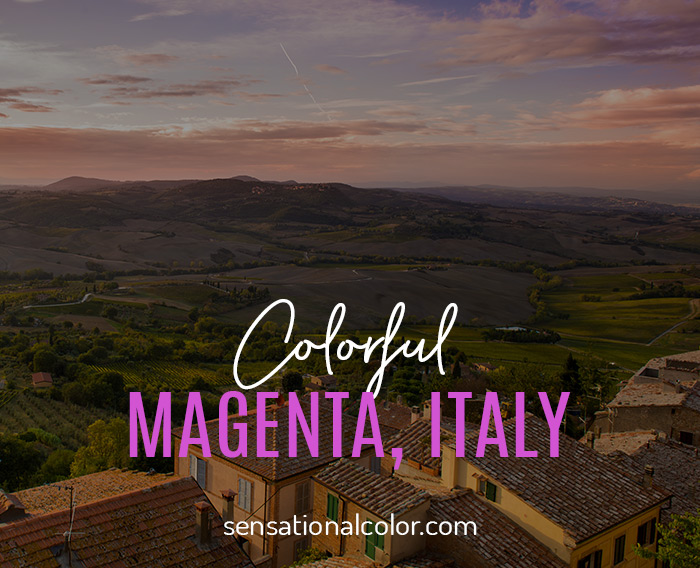 We can thank Magenta Italy, a quiet town outside Milan, for the name of the color that isn't really any color at all, but a trick of the eyes. And, actually, it's probably the French, not the Italians we should be thanking. To be honest, it's all a little confusing, but we'll try to sort it out!

A Battle in Magenta, Italy

Magenta was a turning point in the war. That's all well and good, of course – but how did the color magenta get its name from this battle, what do the French have to do with it, and what was that about it not being a color at all?

As it turns out, the eponymous battle fought in the town of Magenta and the invention of a synthetic aniline dye called fuchsine happened in the same year. In fact, fuchsine was the first synthetic dye ever made – before this; all dyes had come from natural sources such as plants, animals, and minerals. But as handmade rugs from the East gained popularity, the demand to produce cheaper dyestuffs made innovation a priority.

Shortly after the invention of this new dye, the color was named Magenta. Now, here's where the French come in. The color reminded someone – most likely the person who came up with the name – of the uniforms worn by the Zouave troops of the French army that fought in the Battle of Magenta. There were no photographs at that time, naturally, but paintings of the Zouave troops, as well as depictions of the battle, featured their brightly colored, baggy pants.

A quiet town in Italy gave us the name of this color that isn’t really a color at all, but a trick of the eyes.

So if some French pants in an Italian town inspired the name, why is there any debate as to whether or not Magenta exists? After all, these aren't the emperor's new clothes – we can all agree that the French weren't fighting pantsless!

Don't worry. Magenta is a color – at least on paper, and in cans of paint, and on your computer screen. Where it does not exist, though, is in the light spectrum visible to humans and gives a name to what our eyes are telling us we're seeing.

In the spectrum, there is violet, blue, green, yellow, orange, and red – but there is no pink, known among scientists as the slang word for Magenta. When we see Magenta, what we see are both ends of the light spectrum – violet and red – and our brain is inventing Magenta all on its own!