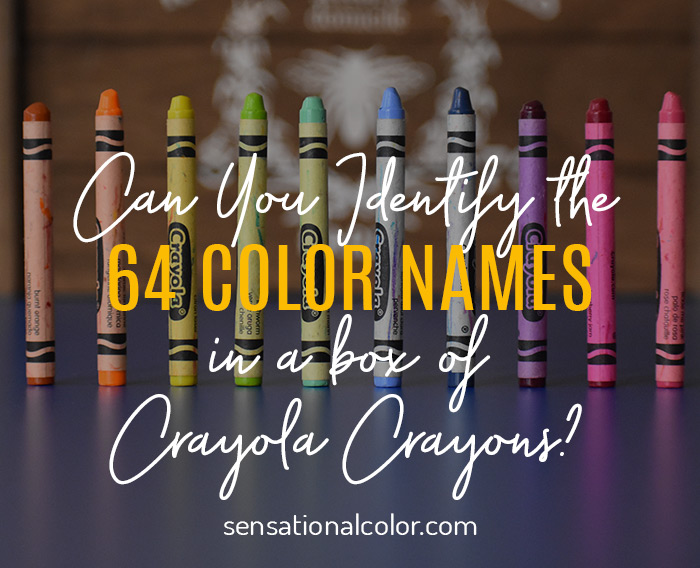 I named all 64 Crayola crayon colors correctly. Can you?

Okay, so maybe it did take me three tries before I got all 64 but the first two times I made silly mistakes and got 4 and two wrong on each respective try. I really do know that the new pink is named "famous" and not "celebrity" but I had started with the top row so by the time I got to the front row I was under extreme pressure. All of the newer names are in the front and who came up with those names anyway?

I remember when the color names at least remotely gave you a clue as to the color but not so any more. Is it any wonder that will so much at stake that I could get confused and pick "green eggs and ham" instead of "giving tree"? But on the third try my clicking finger was steady and my nerves were under control and I was able to name all 64 crayons in one try.

So if there was ever any doubt it has now been cleared up…I am a "Color Genius" and I have the certificate from Crayola to prove it. Are you a Color Genius too? Put yourself to the test and see how many of the 64 color names you can recall at the Crayola website.

About the Crayola Box of 64 Crayons

An American cultural icon, the Crayola 64 Box made its debut in 1958 on the "Captain Kangaroo Show." More than 200 million Crayola 64 Boxes have been sold over the last 50 years. The 12.8 billion crayons inside would circle the earth 24 times. An original 64 Box was added to the Smithsonian's National Museum of American History in 1998, the same year it was inducted into the National Toy Hall of Fame. The most popular color inside the Crayola 64 Box is blue.

To mark the 100th anniversary of the introduction of Crayola Crayons, the company asked kids across the country to come up with new crayon colors they felt were "in" for 2008. Here's what they selected as the eight Kids' Choice Colors: