Sometimes it takes forever to complete a DIY project but in this case I completed faux finishing my guest bathroom in just two days. That's the good news.

But the even better news is the reason that it has taken me longer than expected to take some photos and share my result with you– I've been working with two new corporate clients but more on that later. 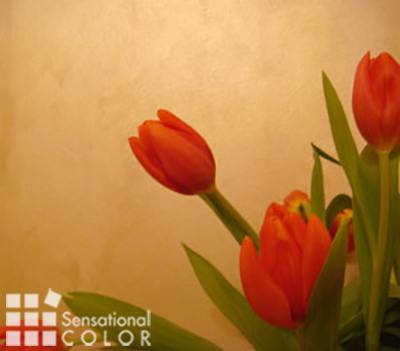 A close-up of the brushed pearl effect

I used Valspar Brushed Pearl paint and am very pleased with the results. Even my 17 year old was "wowed" which is really saying something about how outstanding it looks because he doesn't usually pay much attention to my decorating projects 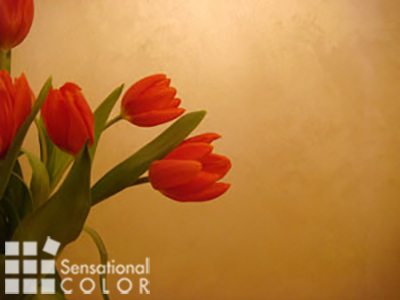 A close-up of the brushed pearl effect

These photos don't do justice to the gorgeous brushed pearl effect

Here's how the project went from start to finish:

My very first step was stopping at Lowe's to buy the paint and sealer. I chose color BP1 'Simply Elegant'. While I was there I also picked up the 4″ brush and trowel they sell specifically for this purpose.

A scan of the color card just to give you an idea of the variety of colors; please look at an actual card for accurate color rendition

Next I had my painter put the base coat on the walls and ceiling so all I had to do was to apply the pearl layer. I did this as a time-saver not because it was difficult since the first coat is essentially the same as if you were simply painting any room.

After allowing ample time for the first coat to dry I applied painter's tape around all four edges of two opposite walls. I don't think that instructions say to do this but I know from experience that this makes all the difference in achieving a flawless finish and is worth the little bit of extra time it takes.

I used painter's tape at each point where two walls met

Having done faux finishes in the past I have learned that you get the best results if you do opposite walls and let them dry. Then reposition your tape onto the dried walls and paint the remaining two walls. If you don't do it this way I find it very difficult to get a professional finish where the two walls meet. 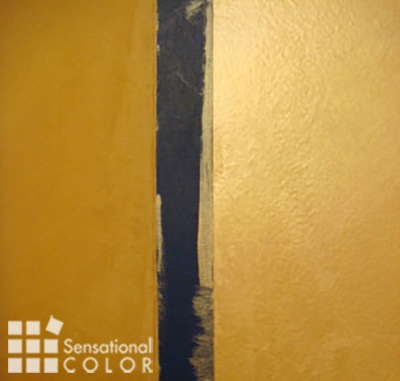 After the first wall was dry I repositioned the tape and started on the adjacent wall.

Using the 4″ brush I began painting at the upper left corner of one wall and worked my across and down. Since I had taped I didn't bother to cut in the edges ahead but rather did this as I went along.

Troweling over the surface is the second step of applying this layer. I went at it at first with a very gentle and deliberate strokes but found that being looser and less measured produced a more pleasing surface appearance. Now that was my first clue that this product was different than most of the prepared faux finishes I have tried in the past.

With the first coat I got a feel for the product and how it handled. I found that I could work rather loosely and quickly which was especially good since I jumped right into painting after dinner on Friday night rather than wait until Saturday morning.

By the second wall I knew exactly how to get the look I was after and the process went even more quickly and I was cleaning my brush before the late night news was over. 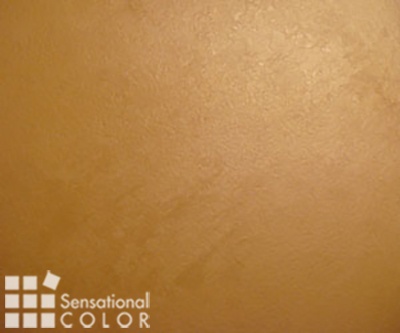 Of all the faux finishes I have used I found this one to be the most "forgiving". As I painted I was able to go back over areas and they blended beautifully. After I used the trowel if there were areas I thought looked a bit too strong I was able to soften the effect by dry brushing very gently over the area using an X motion.

I painted not only the wall but also the ceiling because I wanted to make this small guest bathroom seem more spacious. I had originally painted the ceiling with the base coat and I had planned to leave it at that rather than struggle to faux finish it however this technique was so simple that I decided to complete the ceilings with the Brushed Pearl finish to match the walls.

After the paint was dry I had my painter put on the protective sealer and put up the fixtures and switchplates. Adding the sealer did not change the look and in fact may have actually added to the luster. 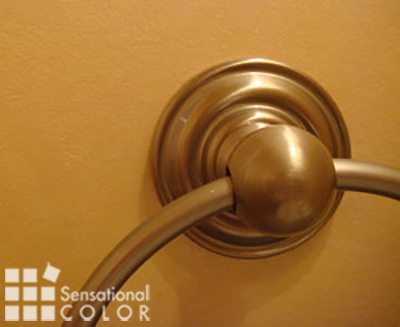 Did I mention that I hadn't even been considering doing a faux finish in this room? I am so over faux finishes at this point having helped just one too many of my friends fix their Ralph Lauren and other faux DIY projects. However, when I saw the Brushed Pearl finish I was so taken with the look that I quickly forgot all that and headed off to Lowe's to pick up the paint.

I'm really glad I chose Valspar Brushed Pearl. The process was simple and the results beautiful. I think that even someone doing faux finish for the first time would have success with this technique. In fact I doubt I'll receive any S.O.S. calls from my friends if they use this product.

My final words on this project:

"The bathroom with Valspar Brushed Pearl Paint certainly looks 'Simply Elegant' just as the color name said it would!"