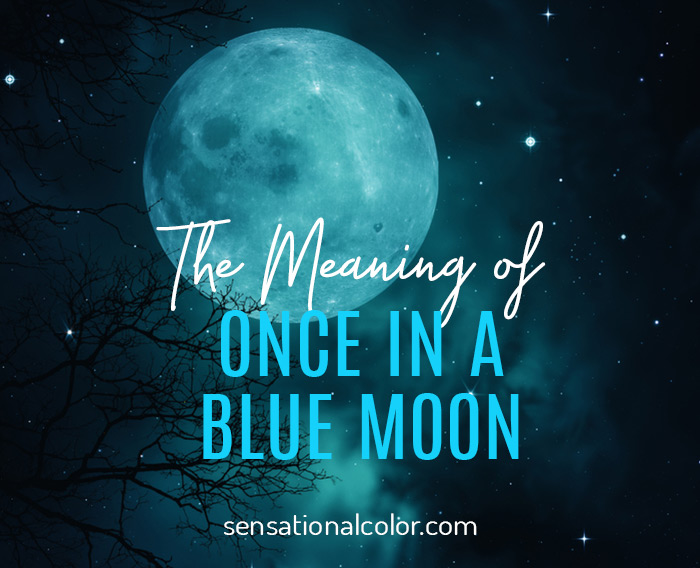 Initially, once in a blue moon meaning referred to an absurdity, according to the Oxford English Dictionary. The OED notes a reference to a proverb from 1528 that says, "If they say the moon is blue, we must believe that it is true." And while the moon is not blue, it can appear blue.

Meaning "Rarely" Rather Than The Color Blue

It happens only rarely, when small particles in the atmosphere scatter more red light than blue, allowing less red light to be seen from the ground. This makes the moon temporarily appear blue. Although this phenomenon is quite rare, it has altered the meaning of the phrase, which is now commonly understood to mean "now and then."

When Can You See This Colorful Moon?

While this was a misinterpretation of the original meaning, after a couple of decades of widespread use (or should that be misuse?), we consider the 13th full moon in a year or the 2nd full moon in a given month also be blue.

Do you know when the next Blue Moon will appear? Find out...

Even more rare than an annual occurrence is a monthly moon of this type. 2018 was a year of double monthly blue moons -- January 31st and March 31st, 2018 – and this phenomenon won't be seen again until January and March 2037, according to earthsky.org

There is also a seasonal blue moon, which is the third of four full moons in a season. For a list of dates of all occurrences for several years out visit moongiant.com

Then, mark your calendar for the year 2048, which will be very blue with a monthly and a seasonal moon occurring in the same calendar year!

Did you know that there is also a Black Moon? See why I call it this moon's wallflower cousin .