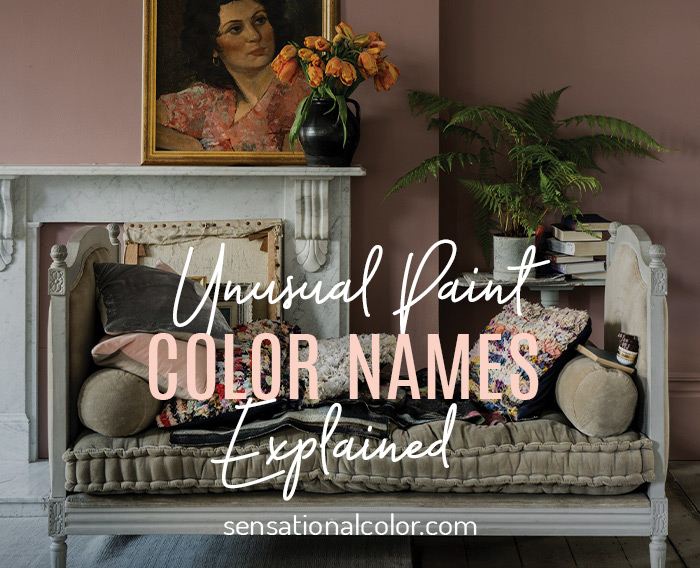 When it comes to naming colors, sometimes a perfect descriptor comes to mind almost instantaneously, and sometimes I end up pondering possibilities for hours or days. Either way, my thoughts are always on how well the name conveys the character of the color and how successfully it will link the color to something positive in the mind of the customer.

You can imagine my eyebrows raising the first time I saw Farrow & Ball's choice of unusual color names like Dead Salmon, Arsenic, Monkey Puzzle, and Clunch. This inquiring mind had to know why. Learning about the origins of the name Dead Salmon took nothing more than a look at the Farrow & Ball website, where it says, "The name comes from a painting bill for the library at Kedleston of 1805, though in fact, analysis suggests that the color is far closer to No. 21 Ointment Pink. Dead Salmon, as depicted here, is rather more 'tired' in character than it once was. I'm not sure how something can be any more 'tired' than being dead, but I understood their point. Ointment Pink is a warm, neutral color that does look slightly more 'alive' than Dead Salmon.

Just like the company itself, the color names are steeped in tradition. However, even with all of my experience in color, I still didn't know what to expect for colors named Monkey Puzzle or Clunch. It turns out; it's not the blocks themselves but the block material a very soft limestone chunks that can be very fine & white – similar to chalk. Not sure exactly where to find it or that I'd recognize a "very versatile off-white" chunk of clunch even if I did stumble across it, but at least now I know the reason behind the name.

So why would a dark gray described as "A typical 19th-century estate color which has, like so many successful colors, endured the generations" be called Monkey Puzzle? While I suspected the answer was rooted in nature, I had no idea that Monkey Puzzle was a type of pine tree.

Native to Chile and Argentina, this conifer found its way into the rare plant collections of England. The name came about in the 1880s when an Englishman commented that the tree would certainly be a puzzle for a monkey to climb. I do not that monkeys would have ever encountered this tree since I don't believe they inhabited the same native soil as the trees of the U.K. in the 1800s.

I have no idea who the gentleman was, but he must have been someone important – otherwise, I'm not sure anyone would have ever repeated those words, no less used them to name a tree. I didn't have to see the paint chip to know that Arsenic was a name for green. Perhaps a name that wouldn't make it past the P.R. or marketing departments in most U.S. companies, but one that has historically been associated with the color green because Arsenic was used in the manufacture of green pigments in the 1800s.

Schweinfurt green was an emerald green often used in a wallcovering that, in its day, was very fashionable yet very deadly. The green pigment had a high arsenic content, making it extremely poisonous. Unfortunately, many people unaware of the danger of time spent in rooms covered in green wallpaper died of arsenic poisoning — an appealing green color, perhaps, but indeed an unfortunate association.

While researching these color names, I saw many comments in the media about how witty the Farrow & Ball color names are, and I had to wonder whether any of these writers would have said so, had they understood the historical significance of these seemingly clever names.

The one exception might be an observation that Angela Voulangas, a graphic designer from Brooklyn, NY, shared on her blog. She gave a very entertaining explanation of why a drab olive green has the name, Dauphin:

"Dauphin," I realize in hindsight, is given a very elliptical description: An earth pigment color in the early 18th-century school of "drab."

First, "school of drab" is just so…perfect, so Edward Gorey…second, how does one get "Dauphin" for a khaki olive brown?

After some investigation, I see perhaps F&B are too genteel to explain that the color "caca-dauphin" became fashionable when the much-longed-for French crown prince was born to Marie Antoinette, in the 1780s. Ah, "Dauphin's Poo."

Feature and Product Image Credit: Images on this page are registered trademarks of Farrow and Ball and are being used here under nominative fair use.