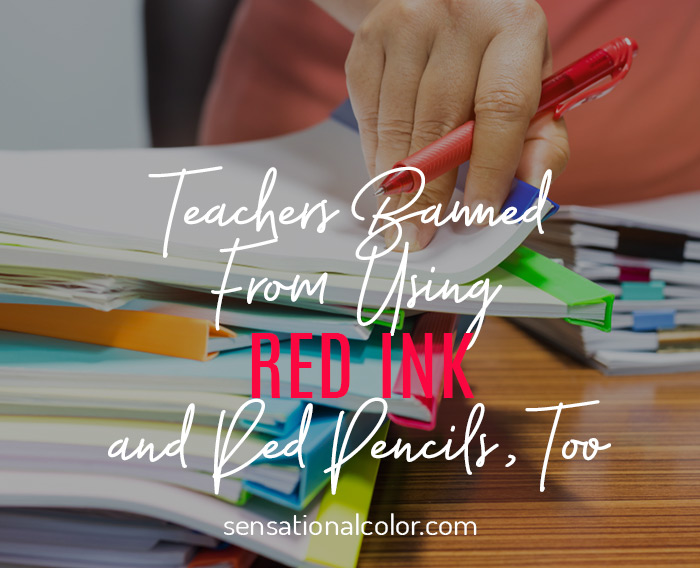 “TEACHERS have been told to stop marking schoolchildren’s work with red pen because it is an “aggressive” colour.

Queensland’s Deputy Opposition Leader Mark McArdle told parliament today that teachers were being advised to reconsider their pen choice because it may offend children.”

As of this morning 301 readers had commented on the article and left some very negative reactions that I enjoyed reading. It is always so enlightening to have people express their understanding (and misunderstanding) of the effects of color.

The Courier Mail displayed their sense of humor over the issue. The picture above is one of several they posed. For a laugh see the entire Red Pen Rogues Photo Gallery

I couldn’t help but leave a comment of my own. Not sure if it will be published but here is what I wrote:

It does sound a bit far fetched but here is a link to a study that shows red can have a negative impact on academic achievement. The problem is more in the association of red being almost universally used by teachers to mark errors or mistakes as “WRONG” than with the fact that the color is generally aggressive.

In the long run if would seem the only way to overcome this is if teachers were to consistently “mix it up” where color is concerned and use a variety of colors instead of just red. If there was not a “standard color” it is likely that future generations wouldn’t have this association and if the study was conducted the results would be different.

For current students however I’m not sure that changing it would have an immediate positive impact. Color associations are deeply rooted in our mind often without us even realizing it. The associations formed in childhood seem to be particularly strong.

I was tempted to add my comment about the problems of having legislators get involved in anything even remotely linked to aesthetics but that’s a much longer conversation for another day.