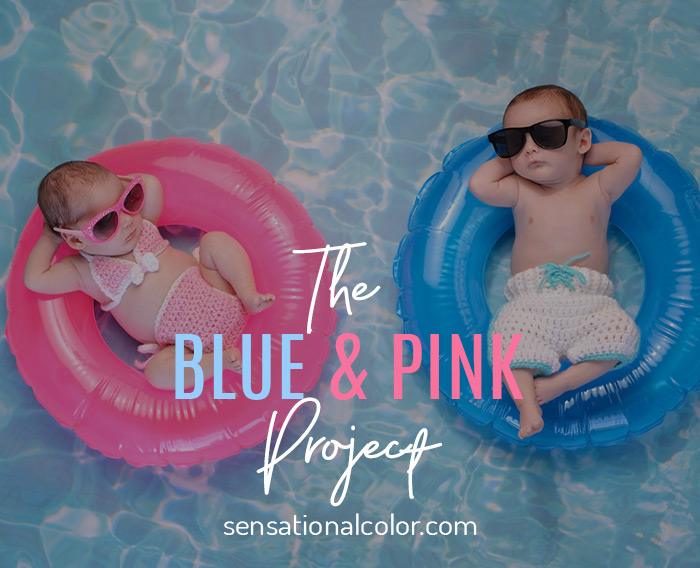 In 2007 I had an opportunity to appear on CBS Sunday Morning in a segment called In the Pink. The show aired just before Valentine’s Day so was focused on the color pink but of all the things I shared the point they seemed to find most interesting was the fact that the commonly accepted idea that pink is for girls (and blue is for boys) didn’t become a widespread association until after WWII.

This fact also fascinated photographer Yoon JeongMee as she began exploring “the trends in cultural preferences and the differences in the tastes of children (and their parents) from diverse cultures, ethnic groups as well as gender socialization and identity” in 2005 through a body of work she calls The Pink ﻿﻿and ﻿﻿Blue Project.

As a child my own son was never obsessed with a single color but I have known many children who have (or had) a mono-hue mindset. Even so I never realized the impact of their “color love” until viewing this series of photographs.

Yikes, some of these young boys and girls seem almost lost in their many, many, (way too many) treasures of pink or blue.

What Yoon JeongMee has to say about The Pink and Blue Project.

This project began with my daughter. My six -year-old daughter loves pink. She wants to wear only pink clothes and only own pink toys and objects. My daughter is not unusual. Most other little girls in the United States and South Korea love pink clothing, accessories and toys. This phenomenon seems widespread among various ethnic groups of children regardless of their cultural backgrounds. This preference is the result of cultural influences and the power of pervasive commercial advertisements such as those for Barbie and Hello Kitty. Through advertising, customers are directed to buy blue items for boys and pink for girls. Blue has become a symbol of strength and masculinity, while pink symbolizes sweetness and femininity.

To make The Pink and Blue Project series, I visited children’s rooms, where I displayed their possessions in an effort to show the viewer the extent to which children and their parents, knowingly or unknowingly, are influenced by advertising and popular culture.

You can see all of the photographs on Yoon JeongMee’s website and let me know what you think about all of the pink and blue.