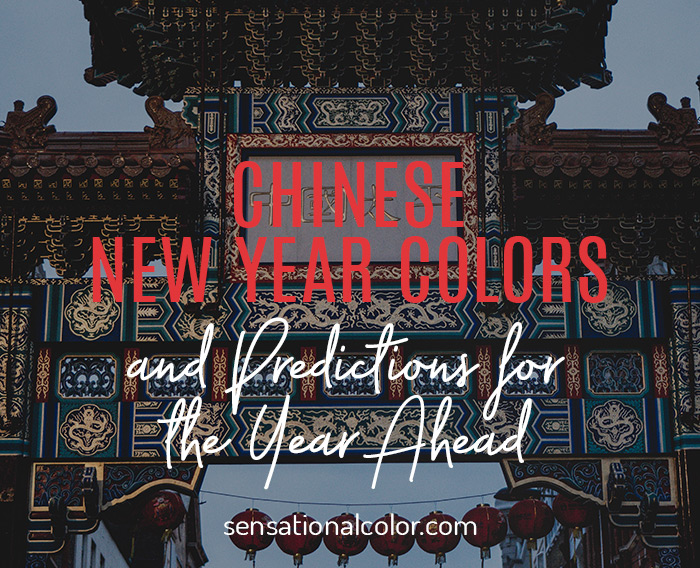 2017 Chinese New Year is arriving on January 28, 2017, and originally I was going to share the colors associated with Chinese new year and their meanings. Instead, in light of what has been going on here in the U.S. in the past week, I thought you would enjoy hearing about the predictions for the upcoming 12 months and the Chinese New Year colors specific to 2017.

There are many, many predictions offered online and the first two sentences in astrologer Eugenia Last’s predictions are an excellent summary of what I’ve read elsewhere:

Conflicts, controversy and plenty of debate can be expected during the year of the Rooster. The cocky presence and fearless action will bring about change, whether it’s needed or wanted by the masses.

Year Of The Fire Chicken

You will see this year called both the Year of the Rooster and the Year of the Chicken. Although rooster is more commonly used in the west, according to the Chinese Fortune Calendar, 2017 is a Fire Chicken.

Female Fire is the fire for cooking, warm temperature, lighting or decoration. It’s related to civilization. Chicken is the Female Metal. According to Five Element theory, Female Metal is the gold, jewelry, gems or fine metal. It’s related to value, beauty or wealth. We’ve seen these things with President and Mrs. Trump. But we’ve also seen the strong female energy of the fire chicken displayed full force at the Women’s March.

Chicken is the 10th animal in the zodiac signs (branches). Chicken is the Female Metal, which is the 8th element in the list of Yin Yang stems. Number 8 is a very lucky number to Chinese in Feng Shui and is connected to big wealth and prosperity. Again, this describes President Trump but it also could mean that the Chicken of 2017 might lay golden eggs for you and me, too. Now that is a prediction I could get on board with couldn’t you?

The Fire Chicken radiates red so you might think that red would be this year’s luckiest color but that isn’t necessarily true. Using red can be like adding too much fuel to a fire. You risk creating a negative rather than positive reaction. Red can be used but it may be best to tone it down to more earthy reds, pinks and to use bright or true red wisely.

Colors that are considered lucky in 2017 include gold, yellow, and brown.

Even before thinking about the Chinese New Year colors, I thought we’d be seeing lots of gold and yellow this year. We’ve already seen the new gold curtains behind President Trump’s desk in the oval office, right?

Politics aside, my hope is that the colors of 2017 actually do come imbued with a large dose of the good luck we all crave right now.

P.S. You can find your birth sign and lucky element here.