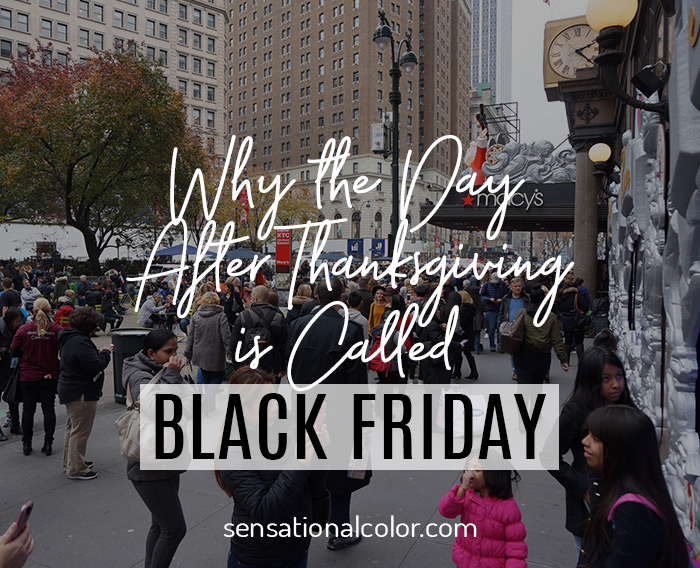 Each year the holiday buying season officially kicks off on the Friday following Thanksgiving, known as Black Friday. It is the day shoppers head out en masse in search of the lowest prices and best deals on holiday gifts. So how did this crazy shopping day get dubbed Black Friday?

Many retailers open early and use hot items or "loss leaders" (selling items below cost to bring the crowds into their stores before they shop anywhere else. The shopping frenzy continues throughout the day even though the prices on many things slide back up to the regular price. There are a few different theories about Black Friday meaning, but I'm in the camp that believes the roots of this phrase go back to the first reference of Black Friday during the 1869 financial panic in the stock market. The New York Times and other newspapers initially coined the phrase at that time. The stock market reference is often erroneously linked to the stock market crash preceding the Great Depression but that time it occurred on a Tuesday in late 1929, not a Friday.

Black Friday continued to be used as a colloquial phrase in the mid-Atlantic states to describe hard times, so it wasn't surprising that the Philadelphia Police Department latched on to the words to describe the center city chaos on the day after Thanksgiving. Bonnie Taylor-Black (American Dialect Society) found a mention of it being used in this context as far back as 1966:

'Black Friday' is the name, which the Philadelphia Police Department has given to the Friday following Thanksgiving Day. It is not a term of endearment to them. 'Black Friday' officially opens the Christmas shopping season in center city, and it usually brings massive traffic jams and overcrowded sidewalks as the downtown stores are mobbed from opening to closing.

Others say that it came about as part of a mid-1980s anti-consumerism backlash, when people took a pledge to stay home, rather than shop creating a spending "blackout" on that day. I think they just franchised this phrase for their movement rather than this being the origin.

So how did the crazy Friday after Thanksgiving shopping day get dubbed Black Friday?

By 1975, retailers were using 'Black Friday' within the industry to describe the day since it was the one day they knew they would turn a profit. For many retailers, Q4 sales (Oct, Nov, Dec) can make the difference between what is considered a poor year and a profitable one. For this reason, you may also hear the media refer to Black Friday as the day when retailers have the opportunity to end their year in the black (an accounting term meaning they turn a profit).

In the late 1990s, online shopping was beginning to add to the Black Friday meaning as deals were being offered online in addition to being available in the physical stores. The visibility on the retailer's web presence coupled with ridiculously low prices and pre-dawn deals cemented the phenomena known as Black Friday in the hearts and minds of shoppers who now set their alarms extra early to take advantage of some fantastic savings in both venues.

Many retailers capitalize on this opportunity as a way to makes more sales by opening at 5 am or earlier. Some of the larger are now opening late on Thanksgiving day and remain open for 24 hours on Black Friday or until midnight the following Saturday.

An entire web-based industry has sprung out of the Black Friday phenomenon. There are websites devoted to providing money saving tips and sneak peeks at the best deals and Black Friday ads weeks before readers of the local newspapers.

As more and more people made their holiday purchases online, the bricks and mortar Black Friday developed an online counterpart known as 'Cyber Monday'. According to Wikipedia Cyber Monday is a neologism invented in 2005 by the National Retail Federation's division Shop.org. However, I know from my own experience as Director of e-Commerce for America Online (AOL) in 2000-2001 that the term Cyber Monday was already widely used by online retailers many years earlier.

Cyber Monday refers to the Monday immediately following Black Friday based on a clear consumer trend that retailers began to recognize in 2000 as consumers took to shopping online. At that time, retailers noticed that many consumers, who were too busy to shop over the Thanksgiving weekend or did not find what they were looking for, shopped online the following Monday to find bargains.

Now the big question. Where will you be this on the Friday after Thanksgiving in the wee hours of the morning? Are you tucked in bed or out and about with a few doorbuster bargains stashed in the trunk of your car?