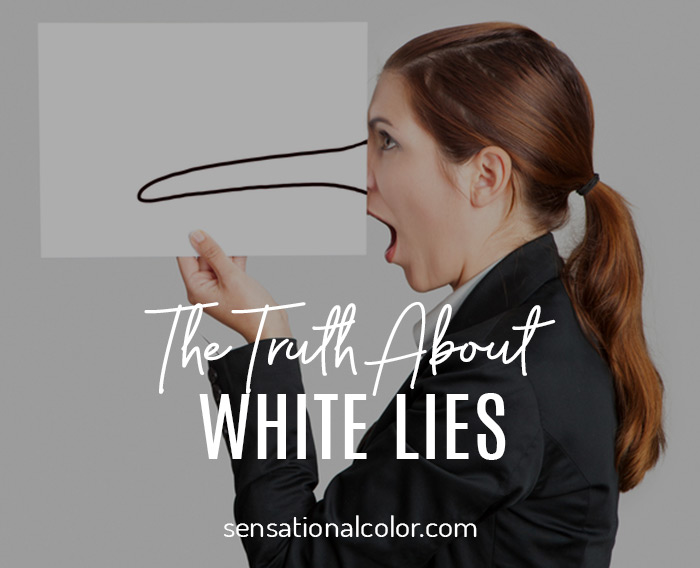 Those who think it is permissible to tell a white lie soon grow color-blind.

Most people, even those who insist they would never tell a lie, have told a white lie. These lies are the little, untruthful things we say in an effort to save someone’s feelings, to avoid a trivial but sticky situation, or simply to be polite.

White lies are often employed in relationships, and many a man has relied on a little lie when that special person in his life poses the question, “Does this make me look fat?”

The term “white lie” has been used since at least the 1700s. The earliest the phrase appeared in print was 1741, according to the Oxford English Dictionary, when the contrast between white and black lies was examined.

The excerpt found on World Wide Wo﻿r﻿ds includes amusement as one of the reasons for telling a white lie.

A certain Lady of the highest Quality ... makes a judicious Distinction between a white and a black Lie. A white Lie is That which is not intended to injure any Body in his Fortune, Interest, or Reputation but only to gratify a garrulous Disposition and the Itch of amusing People by telling Them wonderful Stories.

Why use the color white to denote a lie that – while it is an untruth – is kinder than the truth? White has always been the color of innocence, righteousness, goodness, and purity. Calling a lie “white” is the perfect way to separate it from the darker lies that are told to be cruel, malicious, or hurtful.

Have you ever told a white lie? This is the reason for adding white to an untruth.

According to Wikipedia, some people, mostly children, use the gesture of crossing their fingers to excuse their telling of a white lie. By extension, a similar belief is that crossing one's fingers invalidates a promise being made.