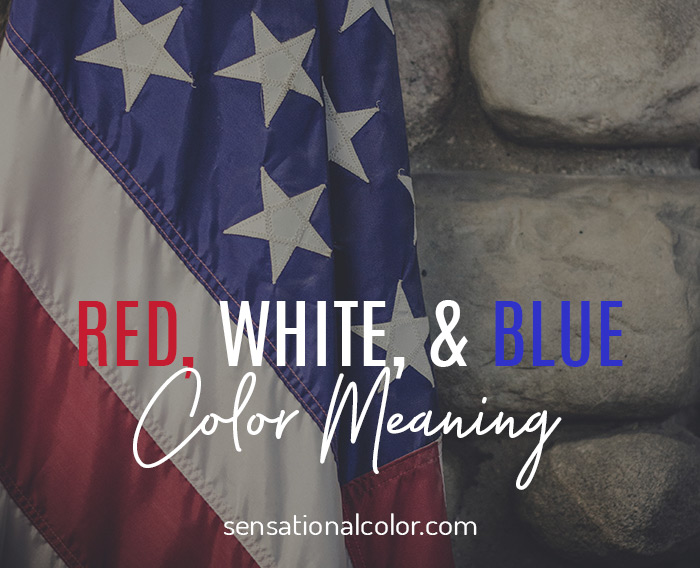 Every Memorial Day and July 4th millions of Americans get into the celebratory spirit. They adorned their homes with flags and striped bunting. They even deck themselves out in patriotic colors. But what is the red white blue meaning associated with this symbol of the USA? Why are the colors in the American flag red, white and blue rather than green, yellow and blue or some other combination?

The flag of the United States of America is a symbol of freedom and liberty. When I was a child each school day began with the pledge of allegiance. Standing at attention, facing the flag with right hand over the heart, reciting:

"I pledge allegiance to the Flag of the United States of America, and to the Republic for which it stands, one Nation under God, indivisible, with liberty and justice for all."

It was this one simple daily act that ingrained the symbolism of the flag and the red white blue meaning into my mind. Years later while studying color meaning, symbolism and psychology I became curious as to why these colors were chosen to represent our country. Here is what I learned.

The Continental Congress adopted the American flag in 1777, to celebrate the country’s independence and unity. A specific meaning behind the choice of colors was not given at that time. However, five years later, in June 1782, the Continental Congress introduced the seal for the USA. It was then that the significance of the colors and the red white blue meaning was revealed. (usa.gov)

Charles Thompson, who was Secretary of the Continental Congress
at the time, told his assembled audience

White signifies purity and innocence, Red, bravery & valour, and Blue, the color of the Chief, and the placement of the broad band signifies, vigilance, perseverance & justice.

The stripes on the flag represent the 13 states and thirteen white stars in a blue field represent a new constellation symbolized their union.

Our founding fathers recognized the ability of color to communicate meaning. But, whether Americans know the specific significance of each of the colors is not as important as the power of these colors to evoke our patriotic spirit and unify us as a country.

Seeing these colors evokes feelings of pride for our country and an appreciation for all who have made it a great place to live. What is the meaning of red, white and blue for you?​ I invite you to leave a comment to let me know.