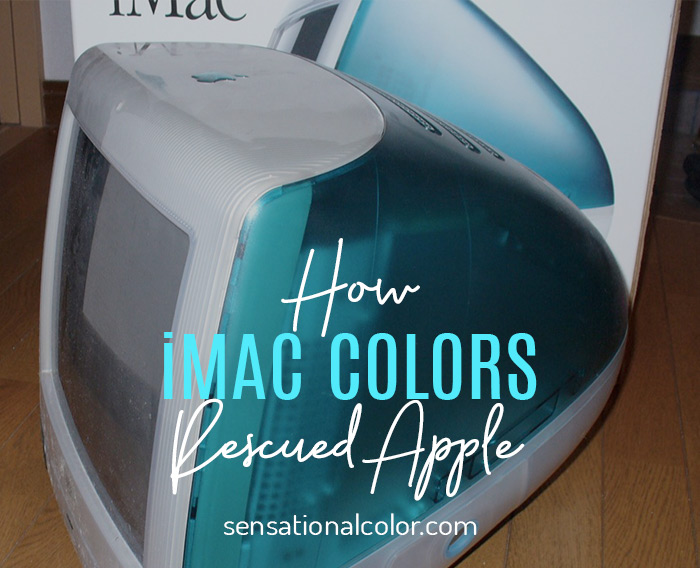 In the late '90s, Apple was faltering under the direction of their third CEO in almost as many years, and so the powers-that-be returned Steve Jobs to the helm of Apple.

With Jobs in the driver's seat again, it was time for Apple to make a statement that was a radical counterpoint to the current Performas and Power Macs. It was under Jobs that Apple came back to the all-in-one basics that initially made it famous.

As part of its strategy, Apple wisely chose to make an attention-grabbing statement through the creative use of color! Goodbye, boring beige. Enter Bondi Blue, the name coined by Apple Computer, Inc. for the color of the original iMac computer released in 1998.

Commentators noted that Bondi Beach is famous for surfing, whereas the iMac is for "surfing the web." Though I've never seen it officially said, a common belief is that two New Zealanders who had previously lived in Sydney and were working for Apple chose the color's name because it reminded them of the color of the water at Bondi Beach . Apple's use of translucent candy-colored plastics inspired similar designs in other consumer electronics. Apple subsequently released many other colors including blueberry, strawberry, tangerine, grape, and lime; later different colors, such as graphite, ruby, emerald, sage, snow, and indigo, and the "Blue Dalmatian" and "Flower Power" patterns.

The iMac delighted computer purchasers and was the best selling computer in the U.S. and Japan for many months. The popularity of the iMac increased Apple's brand awareness and embedded the iMac into popular culture. The high sales pleased shareholders and put Apple back in the game.

The rest is history.

Feature and Content Image Credit: Masashige MOTOE and released under CC-BY-SA-2.0
Product shown on this page are registered trademarks of Apple and are being used here under nominative fair use.