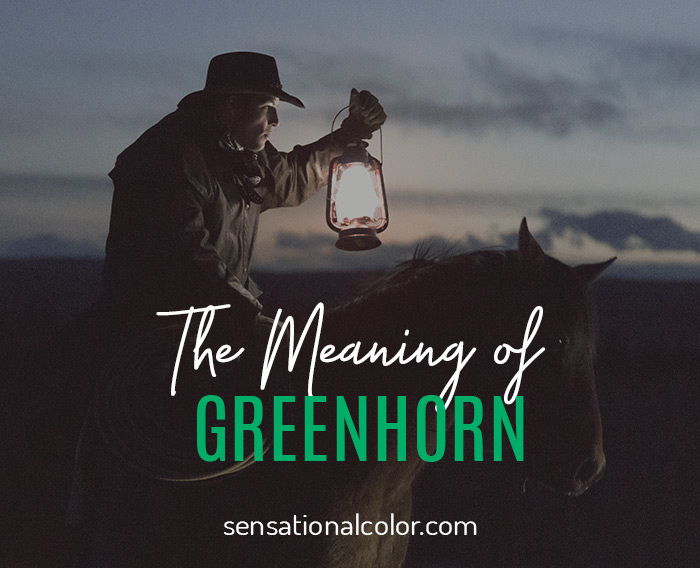 When Jack London wrote about a "greenhorn" in 1887, the term already had the same meaning that we recognize today, referring to a person as a novice.

He showed he wasn't all greenhorn, an' he learns pretty quick.

The Valley of the Moon by Jack London

The Meaning Of Greenhorn Dates Back To The Old West

Greenhorn was a popular term in the Old West of the 1800s, used by mountain men and experienced settlers in reference to new settlers fresh from the city and who had no idea how to deal with the rugged frontier. The term dates back to at least 1650, when new English Army recruits were called greenhorns to denote their lack of training.

How Did This Sometimes Derogatory Yet Colorful Saying Come To Mean An Inexperienced Person?

Green often means "new." The color green alone has long been used to mean something immature. For example, young trees often have a greenish tinge to the wood and sometimes in the bark. Anyone who has tried to start a fire with green wood knows it doesn't burn well. It is too damp, too new. Only seasoned or old wood burns well.

How did greenhorn come to mean an inexperienced person? Find out. #color

Many fruits and vegetables are green when they are too young to eat, changing color as they mature. An untrained horse is considered green until he receives training. Unbaked ceramic pottery is called green until it's fired in a kiln. There are plenty of examples of green referring to something new or inexperienced. But where did the horn part come from?

It's interesting to note that young oxen horns have a greenish tinge to them. They lose this coloration as the horn gains age and thickness. When you team the horn coloration with the inexperience of a young oxen team, it's easy to see how green and horn came to be paired together.

A few references also allude to a jewelry manufacturing practice of the 1800s involving horn. Artisans would create a cameo-styled jewelry piece out of horn and silver that needed to be heated to set the piece. Inexperienced artisans would use the incorrect amount of heat, leaving the horn with a greenish tinge instead of the preferred brown. Those that created the tainted pieces were known as "greenhorns" afterwards.

Whatever the reason, greenhorn is firmly embedded in our language as a young, naive, or inexperienced person who is likely to get into trouble until she or he gets a little seasoning.