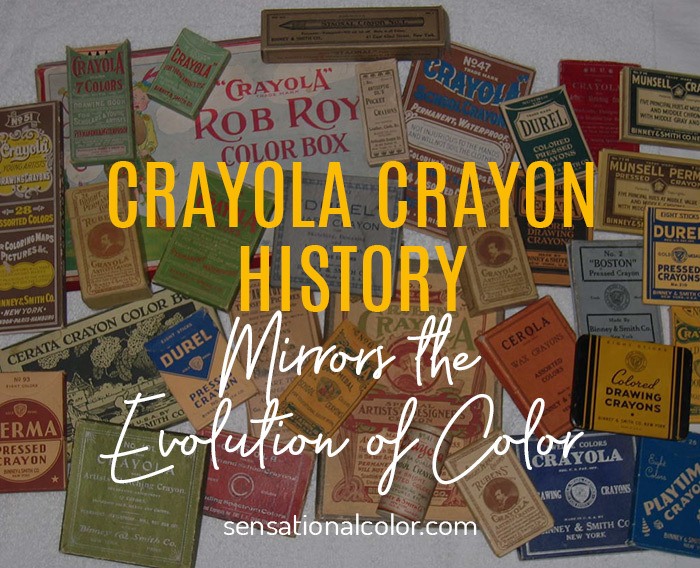 The second half of the twentieth century was a time of explosive expansion in the use of color. All aspects of everyday life were affected by this phenomenon. Post World War II, full-color printing, fabrics dyed with new synthetic dyes, along with color photography and motion pictures aroused our appetite for color.

Increased exposure to color began to greatly affect how we perceived and reacted to the world, while fashion, Hollywood, sports, economics, and culture increasingly influenced color trends. Crayola Crayons are universally recognized and loved by children and adults and, in a nutshell, illustrate the changing landscape and influences of color during this century. Binney & Smith first introduced Crayola Crayons in 1903 with a box of eight colors: Black, Brown, Orange, Violet, Blue, Green, Red, and Yellow. For the next 45 years, the color mix and the color names remained unchanged.

In 1949, the choices increased six-fold, bringing the total in the box to 48 colors; many of the names for the new crayons were more imaginative than those used for the original eight colors and included thistle, periwinkle, carnation pink, bittersweet, cornflower, melon, salmon, and spring green.

The first color name change came in 1958 when the name Prussian Blue was changed to Midnight Blue in response to requests from teachers. In the same year, additional crayons were added, expanding the selection to 64 colors. New colors included Copper, Plum, Lavender, Mulberry, Burnt Orange, Aquamarine, and ten other colors sure to spark creativity in a young mind.

In addition to capturing the imagination, it was recognized that color and color names could influence perceptions and therefore needed to be ‘politically correct.’ In 1962, partially in response to the U.S. Civil Rights movement, Binney & Smith chose to change the name Flesh to Peach.

In 1999, the name Indian Red, which was originally inspired by a name commonly used in fine-artist oil paint, was changed to Chestnut because educators believed that children would think the name represented the skin color of American Indians rather than the reddish-brown pigment found near India. n 2000, The Crayola Color Census Bureau asked over 25,000 participants to vote for their favorite crayon colors.

As a new century began to unfold, Crayola marked their 100th birthday by having consumers again name new colors and vote four out of the box.

Blizzard Blue, Magic Mint, Mulberry, and Teal Blue made way for Inch Worm, Jazzberry Jam, Mango Tango, and Wild Blue Yonder. What crayon colors will remain in the box at the end of the twenty-first century is a mystery, but no doubt will reflect the current trends in the ever changing world of color.

In order below are the 50 favorite crayon colors and year each color was introduced by Crayola:

This information was found on the Crayola website in 2013 but does not appear to be posted today.

You can find loads of fun products and facts about these iconic crayons on the Crayola website.